The Consistency Theory (Grawe, 2004, 2007) view of mental functioning is derived from both broadly accepted findings that goals and schemas govern mental activity, and from Grawe’s own argument that goal formation is developed to satisfy the four basic needs we have previously discussed—attachment; control; avoidance of pain; and self-esteem enhancement. The core constructs of consistency and congruence are the keys to understanding the development and maintenance of both normal and pathological mental processes.

Consistency is described as the “compatibility of many simultaneously transpiring mental processes” (Grawe, 2007, p.170), and is a systemic demand, on a neural level, for harmonious neural flow. When the relationship between intrapsychic processes and states are harmonious, there is a state of consistency. The human mental system strives to avoid inconsistency and develops various mechanisms to move from a dissonant, inconsistent state to a more harmonious state. Consistency regulation is predominantly unconscious and only rises to conscious awareness during exceptional circumstances. The mechanisms we use to avoid or correct strong states of inconsistency have been know as defense mechanisms, coping strategies, or affect regulation. Grawe considers consistency to be a core principle of mental functioning. 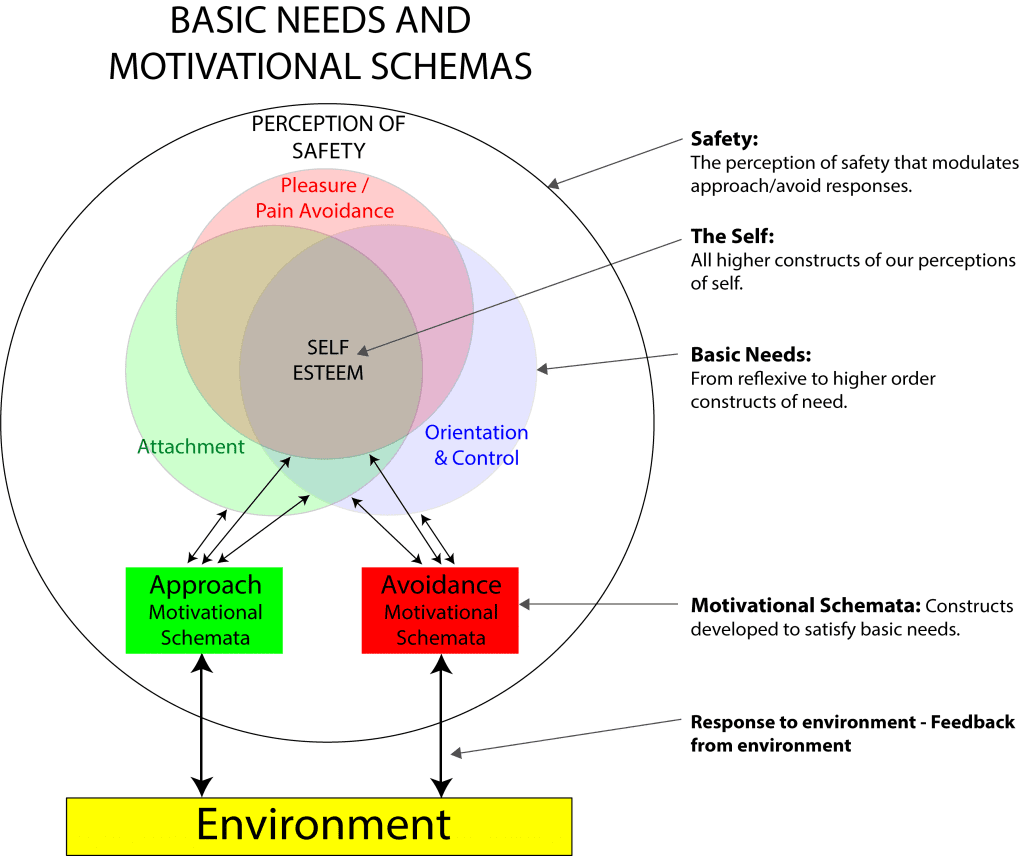 Congruence is a construct that is expressed under the umbrella of consistency. Congruence is the harmony or compatibility between motivational goals and actual perceptions of reality. In other words, the way we perceive our interaction with the environment will have a certain correlation with our motivational goals (what we want so as to satisfy our basic needs), and the degree of agreement, is the degree of congruence. Incongruence signals (see Powers, 1973, perceptual control theory describing behaviour as a means of controlling perceptions) come from the feedback mechanism that contrasts our perceptions with our goals (see the diagram above where the loop between “Experiences and Behavior” connects to “Motivational Schemas”).

So how does control and congruence play out in our mental lives? The key to understanding this is in an understanding of how motivational schemas direct our behaviour (see the above diagram to orientate yourself). A motivational schema is a way we have developed to satisfy and protect basic needs. There are many such schemas but they can be broadly divided into two classes: Approach schemata; and Avoidance schemata. Each of these classes operate on different neural pathways. If someone grows up in an environment where needs have been met, especially in the first few years of life, then approach schemas of interacting with the environment are likely to develop and behaviour is generally approach orientated (we will talk about exactly what this behaviour looks like a little later). In stark contrast, someone who had needs continually violated and threatened is likely to develop avoidance schemas of interacting with the environment and will be orientated to behave in a more insecure, anxious and avoidant way than the individual who experienced a more secure and rewarding development. The understanding of attachment theory (Bowlby, 1988, 2008) is critical to the foundation of mental schemata and, in a nut shell, securely attached children will develop primarily approach motivational schemas and insecurely attached children will develop avoidance motivational schemas.

There are three ways the system can experience inconsistency, through approach incongruence, avoidance incongruence and discordance. These upset the neural harmony of the system and there is a system demand to reduce this stress or dissonance.

Approach Incongruence: If someone has a tendency to utilise avoidance motivational schemas, in other words, they have an established neural propensity to avoid perceived threats to their basic needs rather than approach goals to satisfy those needs, they can experience incongruent signals in regards to unfulfilled approach schemas (that may be much weaker than the avoidance schemas but nevertheless there). For example, a young man has a desire to meet a girl, but fear of rejection prevents him from introducing himself to a potential partner. The avoidant motivational schema is well established to protect the individual from the pain of rejection by another human being, and serves to protect whatever self-esteem and control over circumstances he has. However there is also a desire, a motivational schema, that would desire to approach, to apprehend, to secure a loving relationship with a partner and satisfy the need for attachment. But this desire is suppressed or overridden by the stronger avoidance schema, and thus the individual experiences approach incongruence.

Avoidance Incongruence: This is the situation where avoidance doesn’t work and whatever was feared actually happens. For example, our young man in the above example does make a move to ask a girl out on a date. If he is rejected (the undesired consequence his avoidance schema was developed to avoid) then he will be experiencing avoidance incongruence.

Both these examples demonstrate incongruence in that there is a mismatch, or gap, between an actual experience (perception) and a goal.

Discordance: This is when two or more motivational schemas are activated at the same time and are incompatible with one another. So this is not an incongruence between perception and goal, but rather two incompatible goals being activated simultaneously.

Incongruence and discordance, and the affect that transpires along with them, can happen implicitly or explicitly and cause inconsistency in the system. Taken to extremes, inconsistency impairs an individuals effective engagement with the environment and leads to increasingly avoidant tendencies, stress, negative emotions, anxiety, and a range of serious mental difficulties as survival mechanisms dominate to protect the individual who is descending into a highly complex state of stress.

If we can conceptualise our behaviour as trying to gain or protect our basic needs, and that our style of doing this depends on our motivational schemas, which in turn have been shaped by our earlier experiences (of attachment in particular), then we can better understand how to attenuate positive approach behaviour and prevent or eliminate negative avoidance behaviour.