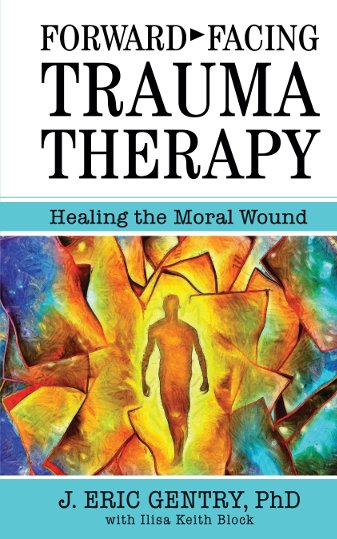 With the publication of his latest book, Forward-Facing Trauma Therapy, Eric Gentry makes a major contribution to the field of trauma and its treatment, while bringing to light the less well-known—yet equally debilitating—accumulated stress illness. He respectfully assesses previous unsuccessful approaches to treating trauma and stress illness, and proceeds to unveil his own program of recovery.

Dr. Gentry begins his book by talking about the importance of the public’s increased awareness of trauma and post-traumatic stress, largely as a result of its prevalence among soldiers returning home from deployments in Afghanistan and Iraq. Although this awareness has led to greater public sympathy towards those injured, it has not necessarily translated into a clearer understanding of trauma and post-traumatic stress by mental health professionals and laypersons alike.

So that readers can have a full understanding of Dr. Gentry’s pioneering theory and practice, I will provide a brief tutorial on the subject.
One might reasonably assume that trauma is the result of an event that is perceived as life-threatening. But this is not always the case; the definition is relative. One person’s trauma could be another person’s painful experience, regardless of how the event was perceived. Actually, as Gentry defines it, trauma is equal to the impact on, or damage done to, the autonomic nervous system (ANS), which is responsible for processing stress. By this process, an external stressor sends a charge of energy into the ANS, this energy is subsequently discharged, and a resolution is achieved. The processing of stress (stressor > charge > discharge > resolution) occurs continuously, even during sleep. The restorative function, akin to a shock absorber, is responsible for the smooth running of the ANS and the preservation of equilibrium.

Trauma occurs when a life-threatening event sends a catastrophic adrenaline rush into the ANS, which does not achieve discharge or resolution. The energy gets bound up in the nervous system like a thickly clogged artery. Consequently, the restorative function can no longer do its job effectively, resulting in dysregulation of the entire system and a myriad of symptoms that we commonly associate with post-traumatic stress injury.
Why does this happen? Why does the ANS seem to fail us?

In the face of a life-threatening confrontation, the ANS shuts down to preserve the entire organism. In early human history, before Homo sapiens developed the upper regions of the brain responsible for reasoning and deliberate thinking (the neocortex), stress responses were dominated by the flight-or-fight mechanism. This led to much death and destruction and served to hamper human progress.

To further elucidate the role of the neocortex in nervous-system trauma, I will provide an example.

A 19-year-old male gas station attendant is held up at gunpoint. His pockets are bulging with cash. With a gun pointing at his head and adrenaline coursing through his body, the higher function of his brain intervenes and commands him to remain still. Do not discharge this energy. Do not fight or flee. Do not provoke the gunman . . . your life depends on it.

If that attendant had instinctively fought the gunmen or somehow escaped (i.e., acted), he would have discharged the adrenaline and brought neurological completion to the experience, in which case most likely he would not have been traumatized or then experienced the symptoms of post-traumatic stress.

Fortunately, this young man did live to pump gas another day, but in the “life-rushing-before-him” paralysis brought on by the higher functions of his brain, all that super-charged energy remained lodged—bound up—in his ANS, hamstringing the restorative function and impairing the smooth processing of all types of stress. Mild stressors became moderate in their impact; moderate stressors became severe; and severe stress became emotionally debilitating, until he received treatment for post-traumatic stress 41 years later.

One of the central questions raised in Forward-Facing Trauma Therapy is how to properly treat trauma and post-traumatic stress, and other forms of stress that cause emotional and behavioral dysfunction. Here, Dr. Gentry outlines a clear summary of a long-running conflict between two schools of thought called “abreaction” and “interoception”.

The abreaction model is based on the belief that if the traumatized patient can somehow relive the life-threatening experience and express the pent-up feelings associated with it, and achieve catharsis, emotional healing can proceed. The abreaction model is similar to other forms of psychotherapy that address nontraumatic, past painful experiences in an attempt to explain present dysfunctional behaviors and modify them.

Interoception differs from abreaction in that it focuses specifically on the re-regulation of an over-reactive ANS by helping the patient identify triggers associated with pent-up traumatic energy and diffusing and nullifying their impact through various relaxation techniques. Although the interoception model acknowledges the importance of identifying traumatic experiences, unlike abreaction, it steers clear of the need to excavate and rehash them.

Dr. Gentry’s form of interoception therapy uses many of the traditional aspects of interpersonal psychotherapy. He first carefully develops a rapport with his patients through active listening and compassionate psychoeducation. Once a trusting relationship between him and his patient is established, the main principles of Forward-Facing Trauma Therapy (FFTT) can be employed: symptom reduction, the re-association of trauma-related dissociated thinking, and the incorporation of a relaxation technique program into daily life to address the core symptom of the post-traumatic existence—the body’s inability to sustain a state of relaxation or calmness.

Through four case studies, Dr. Gentry clearly illustrates his unique treatment approach: a 36-year-old stay-at-home mom was experiencing overwhelming anxiety due to being unable to manage two unruly sons and a faultfinding husband; a 72-year-old widower was weighed down by grief, loneliness, and feelings of meaninglessness; a 15-year-old high school freshman had resorted to cutting herself to relieve anxiety; and a 30-year-old veteran was suffering from the intensifying symptoms of post-traumatic stress. All four patients were treated successfully and in a reasonably short period of time.

Although most mental health professionals shy away from moral and spiritual issues with their clients, Dr. Gentry believes they are a necessary coupling to the nuts and bolts of trauma treatment and serve as a lifelong guide to a client’s ongoing recovery. After reading his splendid book, professionals and laypersons alike will find it hard to disagree.