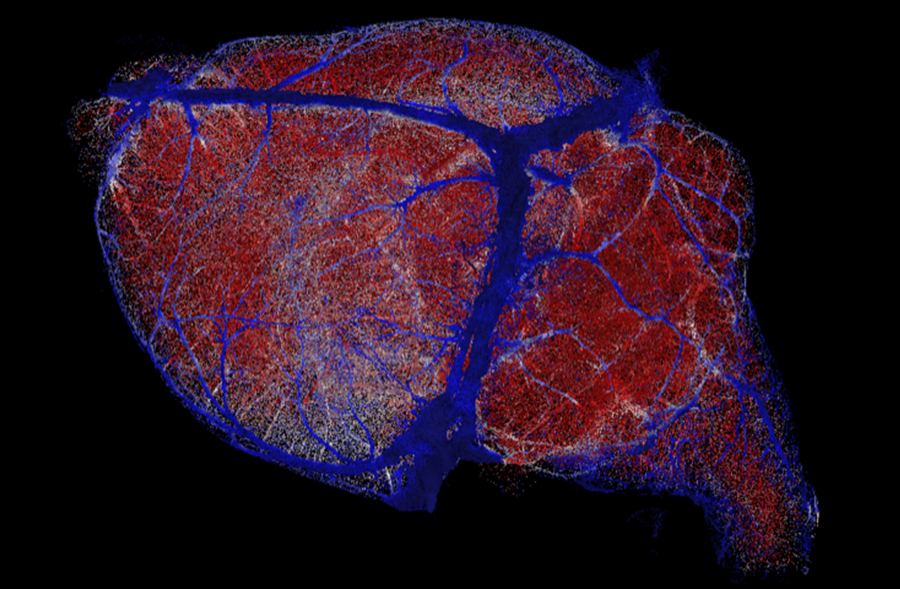 Our brains are non-stop consumers. A labyrinth of blood vessels, stacked end-to-end comparable in length to the distance from San Diego to Berkeley, ensures a continuous flow of oxygen and sugar to keep our brains functioning at peak levels.

But how does this intricate system ensure that more active parts of the brain receive enough nourishment versus less demanding areas? That’s a century-old problem in neuroscience that scientists at the University of California San Diego have helped answer in a newly published study.

Studying the brains of mice, a team of researchers led by Xiang Ji, David Kleinfeld and their colleagues has deciphered the question of brain energy consumption and blood vessel density through newly developed maps that detail brain wiring to a resolution finer than a millionth of a meter, or one-hundredth of the thickness of a human hair.

A result of work at the crossroads of biology and physics, the new maps provide novel insights into these “microvessels” and their various functions in blood supply chains. The techniques and technologies underlying the results are described March 2 in the journal Neuron.

“We developed an experimental and computational pipeline to label, image and reconstruct the microvascular system in whole mouse brains with unprecedented completeness and precision,” said Kleinfeld, a professor in the UC San Diego Department of Physics (Division of Physical Sciences) and Section of Neurobiology (Division of Biological Sciences). Kleinfeld says the effort was akin to reverse engineering nature. “This allowed Xiang to carry out sophisticated calculations that not just related brain energy use to vessel density, but also predicted a tipping point between the loss of brain capillaries and a sudden drop in brain health.”

Questions surrounding how blood vessels carry nourishment to active and less active regions were posed as a general issue in physiology as far back as 1920. By the 1980s, a technology known as autoradiography, the predecessor of modern-day positron emission tomography (PET), allowed scientists to measure the distribution of sugar metabolism across the mouse brain.

To fully grasp and solve the problem, Ji, Kleinfeld and their colleagues at the Howard Hughes Medical Institute’s Janelia Research Campus and UC San Diego Jacobs School of Engineering filled 99.9 percent of the vessels in the mouse brain—a count of nearly 6.5 million—with a dye-labeled gel. They then imaged the full extent of the brain with sub-micrometer precision. This resulted in fifteen trillion voxels, or individual volumetric elements, per brain, that were transformed into a digital vascular network that could be analyzed with the tools of data science.

With their new maps in hand, the researchers determined that the concentration of oxygen is roughly the same in every region of the brain. But they found that small blood vessels are the key components that compensate for varying energy requirements. For example, white matter tracts, which transfer nerve impulses across the two brain hemispheres and to the spinal cord, are regions of low energy needs. The researchers identified lower levels of blood vessels there. By contrast, brain regions that coordinate the perception of sound use three times more energy and, they discovered, were found with a much greater level of blood vessel density.

“In the era of increasing complexities being unraveled in biological systems, it is fascinating to observe the emergence of shared simple and quantitative design rules underlaying the seemingly complicated networks across mammalian brains,” said Ji, a graduate student in physics.

Up next, the researchers hope to drill down into the finer aspects of their new maps to determine the detailed patterns of blood flow into and out from the entire brain. They will also pursue the largely uncharted relationship between the brain and the immune system.