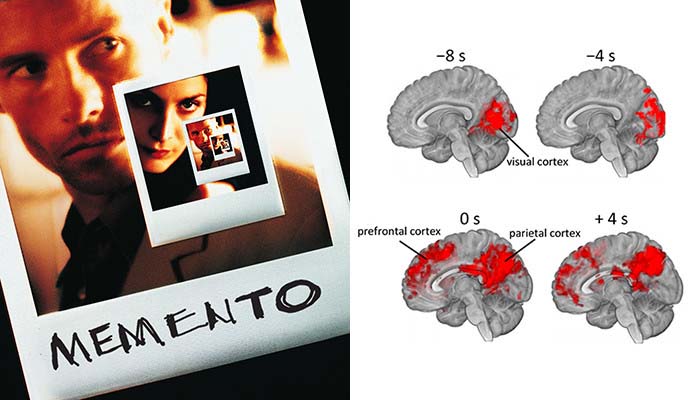 Key repeating moments in the film give viewers the information they need to understand the storyline. The scenes cause identical reactions in the viewer’s brain. The results deepen our understanding of how the brain functions, how narratives work in film, and memory mechanisms impaired by conditions such as Alzheimer’s disease.

In an Aalto University film study combining art and neuroscience, viewers were shown Christopher Nolan’s early classic Memento (2000). The protagonist suffers from long-term memory loss and is unable to retain new memories for no longer than a few minutes. The events unfold in reversed chronological order. To provide the viewer means to piece together and understand the storyline, key scenes repeat at certain intervals throughout the film. These scenes work as clues: they give new information needed to understand the plot.

Every time they appear, the key moments make the same regions of the brain react in an identical fashion. Even the brains of different viewers show similar activity during the same vital scenes.

‘Normally people make sense of a film’s plot in their own individual ways. So far it has been difficult to capture indications of simultaneous understanding in the brains of several viewers with brain imaging methods. We have now, however, managed to identify brain activity connected to the story being reconstructed in the viewer’s mind. The repeating key moments in Memento provide an opportunity to pinpoint viewers’ cognitive activities: they react in a similar way to the information they get from the key moments’, explains Professor Pia Tikka of Tallinn University, who leads the NeuroCine research group initially formed in Aalto University.

The research made use of functional magnetic resonance imaging (fMRI) – which measures changes in the blood oxygen levels in the brain – and also multivariate analysis when comparing the brain activity of different viewers. The brain was divided into three-dimensional data points called voxels. Using multivariate analysis, the researchers studied the activation patterns of the voxels. The key moments in the film triggered similar and repeating patterns the researchers say are close to being “neural fingerprints”.

“What is astounding is that the change in the viewer’s brain, and especially in the visual cortex, starts to occur already seconds before the key scene even begins.”

‘There is a total of 15 key moments in Memento that give the viewer opportunities to better understand the story – sort of “The Butler Did It”-types of revelations. While the activation of the voxels varies randomly during other parts of the film, at each of the 15 key moments certain voxels are in the same position for each viewer and form an identical fingerprint pattern,’ describes Iiro Jääskeläinen, Aalto University professor in systems neuroscience.

The researchers observed the fingerprint patterns across large regions of the brain, especially in the prefrontal lobe and parietal lobe.

‘What is astounding is that the change in the viewer’s brain, and especially in the visual cortex, starts to occur already seconds before the key scene even begins. Clearly there are some kinds of clues in the film communicating to the brain that something worth noting is about to happen. This speaks of the brain’s ability to anticipate and predict,’ Jääskeläinen adds.

Viewers in the control group were shown the film’s events in chronological order, where the key moments were not repeated. No fingerprint patterns emerged, and there was no anticipatory activity either.

Unprecedented in the setup was that the test subjects freely viewed a feature-length, 105-minute film in its entirety in the brain scanner.

‘In brain research, it is more common to show test subjects short sections of the same film or from different films and seek answers for strictly predefined questions. Such a setup, however, does not allow the film’s dramaturgy and characters’ development to properly play out. We have taken a step forward in understanding both the functioning of the brain and the process of understanding film narratives, says professor Tikka, also a filmmaker herself.

The results help comprehend how the brain remembers things based on received or obtained clues.

‘Memento simulates what it feels like to be a person who has suffered damage to the hippocampus that has obliterated the formation of long-term memories. Even short-term memories last only for a couple of minutes before they are gone. The hippocampus also gets damaged – albeit to a lesser extent – in cases of severe and protracted stress as stress hormones gnaw the brain. Our work also sheds more light on the neural basis of memory which is of great help when we wish to understand dementias such as Alzheimer’s disease,’ Jääskeläinen believes.

Related:
Every Brain Experience Is Unique
Sweet or savoury? New research on how the brain makes preference-based decisions
Connectivity