Dopamine is often called the “happy” or “feel-good” hormone. It can help explain both autistic behaviours and men’s need for passion in order to succeed.

Men – more often than women – need passion to succeed at things. At the same time, boys are diagnosed as being on the autism spectrum four times as often as girls.

Both statistics may be related to dopamine, one of our body’s neurotransmitters.

“This is fascinating. Research shows a more active dopamine system in most men” than in women, says Hermundur Sigmundsson, a professor at NTNU’s Department of Psychology.

He is behind a new study that addresses gender differences in key motivating factors for what it takes to become good at something. The study uses men’s and women’s differing activity in the dopamine system as an explanatory model.

Not just a “happy hormone”

“We looked at gender differences around passion, self-discipline and positive attitude,” Sigmundsson says.

Dopamine is a neurotransmitter that is released in the brain. It can contribute to a feeling of satisfaction.

The study refers to these qualities as passion, grit and mindset. The researchers also applied theories to possible links with dopamine levels.

Dopamine is linked to learning, attention and our ability to focus.

Dopamine is a neurotransmitter that is released in the brain. It can contribute to a feeling of satisfaction.

Men normally secrete more dopamine, which is often called the “happy hormone,” but it plays a far more complex role than that. The effects of dopamine are linked to learning, attention and our ability to focus.

Previous studies on Icelandic students have shown that men are more dependent on passion in order to succeed at something. This study confirms the earlier findings. Men require more passion. In six out of eight test questions, men score higher on passion than women. 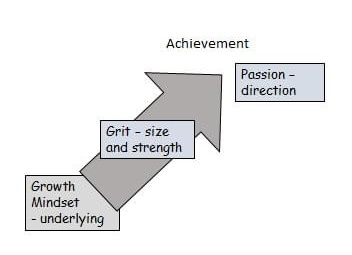 Positive attitude – or mindset – is the basis for a person’s success. Self-discipline – or grit – determines the strength and scope of the effort. Passion determines the direction, that is, what a person becomes good at. Illustration: Hermundur Sigmundsson, NTNU

However, the association with dopamine levels has not been established previously.

“The fact that we’ve developed a test to measure passion for goal achievement means that we can now relate dopamine levels to passion and goal achievement,” says Sigmundsson.

Women, on the other hand, may have greater self-discipline – or grit – and be more conscientious, according to other studies. Their level of passion may not be as pronounced in general, but they still are able to do what it takes to be good.

The results for the women, however, are somewhat more ambiguous than men’s strong need to burn for something, and this study found no such gender difference.

Nor did the researchers find any difference between the sexes in terms of growth mindset.

In the past, the dopamine system has been associated with many different conditions, such as ADHD, psychoses, manias and Parkinson’s disease. But it may also be related to a certain form of autistic behaviour.

Some individuals with autism may become very interested in certain topics, which can be a bit unusual, or even strange, for most people. People on the autism spectrum can focus intensely on these topics or pursuits, at least for a while. Dopamine may play a role.

“Other research in neuroscience has shown hyperactivity in the dopamine system in individuals with autism, and boys make up four out of five children on the autism spectrum. This, and dopamine’s relationship to passion, might be a mechanism that helps to explain this behaviour,” says Sigmundsson.

The research group tested 917 people aged 14 to 77, consisting of 502 women and 415 men. This is considered a major study in this context.

Sigmundsson collaborated with Stéfan Guðnason from the University of Akureyri and Sigurrós Jóhannsdóttir from the Icelandic State Diagnostic and Counselling Centre (SDCC).