As the embryonic brain develops, an incredibly complex cascade of cellular events occur, starting with progenitors – the originating cells that generate neurons and spur proper cortex development. If this cascade malfunctions – if one tiny protein doesn’t do its job – then the brain could develop abnormally.

UNC scientists led by Eva Anton, PhD, professor of cell biology and physiology in the UNC School of Medicine, have shown how the deletion of the protein APC in progenitor cells leads to massive disruption of brain development and the canonical Wnt protein pathway – a signaling cascade– that previously was linked to genes associated with autism.

“Although our experiments were done in mouse genetic models, human APC mutations have been associated with autism,” said Anton, a member of the UNC Neuroscience Center and the new UNC Autism Research Center. “These mutations disrupt the ability of brain progenitors to respond appropriately to the environmental cues necessary for them to divide, and to generate and guide neurons during brain development.”

The Anton lab findings come on the heels of other studies in autism suggesting that, in some cases, the long path toward autism symptoms begins when the development of progenitor cells in the cerebral cortex is disrupted. Other researchers conducted genetic analyses of people with autism to discover that the Wnt signaling pathway was disrupted in these patients.

These two studies led Anton to suspect that something within the Wnt signaling process in progenitor cells could be a culprit, and he set out to test his hypothesis.

In the developing embryonic brain, Wnt triggers a so-called degradation complex inside the progenitor cell’s cytoplasm. This complex destroys the protein β-catenin, thus limiting β-catenin’s ability to enter the nucleus. And that’s important because as progenitor cells divide, this control of b-catenin’s access to the nucleus plays an important role in gene expression and ultimately how neurons are created and how they are channeled to their proper position in various parts of the brain. Given the important role Wnt signaling plays in cell proliferation, it isn’t surprising that Wnt signaling also drives various cancers, as other researchers have found.

In experiments led by Naoki Nakagawa, PhD, a postdoctoral researcher in Anton’s lab, UNC scientists explored what would happen if they altered the degradation complex. One protein in that complex is APC. When Nakagawa deleted APC, the β-catenin was left unchecked, triggering unregulated patterns of gene expression in progenitors.

“If that happens, everything falls apart,” Anton said. “The brain doesn’t form properly. We need β-catenin to get tagged for destruction by that protein complex. If it doesn’t, then Wnt abnormally activates genes in progenitors, causing them to behave abnormally.”

When Nakagawa titered down β-catenin in mice that lacked APC, the mice developed normally. In yet another experiment in mice with APC, Anton’s team hyper-activated β-catenin independent of APC and again the brains didn’t develop properly. “This showed us that it truly was the deregulation of β-catenin that caused problems,” Anton said. “And it’s APC in that protein complex that’s key to proper regulation.”

Although this work suggests neuropsychiatric conditions may arise due to mutations in the embryonic brain – which means it would be much more difficult to medically address – Anton says it’s too early to say nothing could be done to address problems of Wnt signaling in progenitors, in relation to its role in the rise of autism in children later. 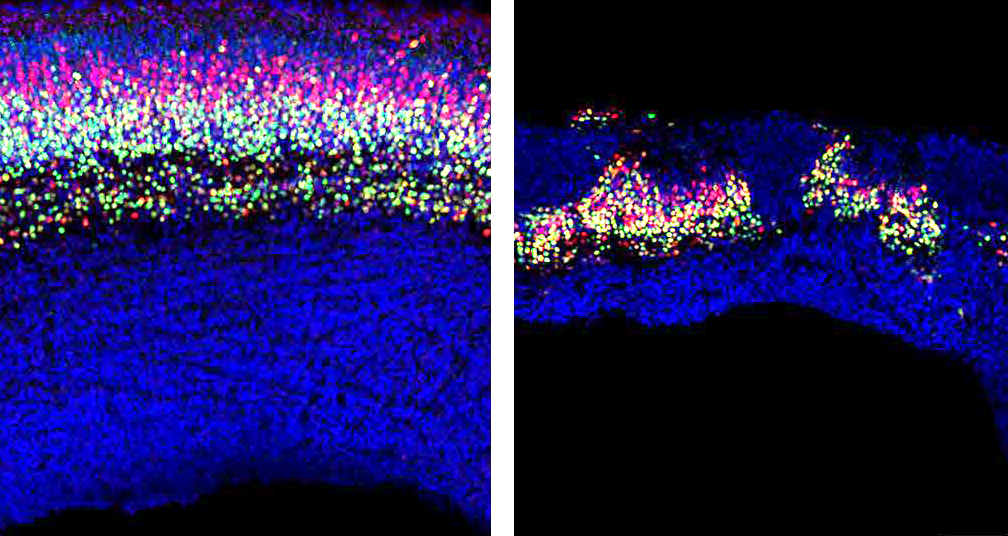 For that, Anton’s lab would start with mouse models. If they show that Wnt signaling in progenitors involves autism genes, then Anton’s lab could turn to human progenitor cells and grow them into “minibrains” to study if progenitors are truly affected in autism patients.

Anton added, “Although progenitor defects cannot be treated in mature brain neurons, with such studies we could at least pinpoint what changed and what needs to be corrected in people who develop autism because of subtle but crucial brain changes before birth.”