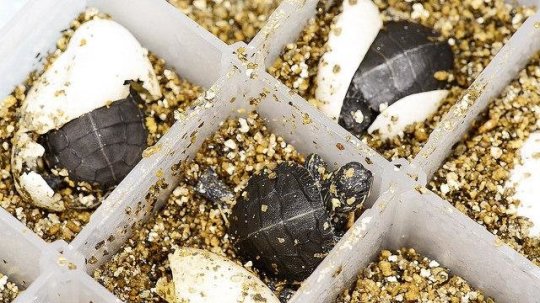 Painted turtle eggs were brought from a hatchery in Louisiana, candled to ensure embryo viability and then incubated at male-permissive temperatures in a bed of vermiculite. Those exposed to BPA developed deformities to testes that held female characteristics. Credit: Roger Meissen, MU Bond Life Sciences Center

Bisphenol A (BPA) is a chemical that is used in a variety of consumer products, such as food storage containers, water bottles and certain resins. In previous studies, Cheryl Rosenfeld, an investigator in the Bond Life Sciences Center, along with other researchers at the University of Missouri, Westminster College and the Saint Louis Zoo, determined that BPA can disrupt sexual function and behavior in painted turtles. Now, the team has identified the genetic pathways that are altered as a result of BPA exposure during early development.

“Painted turtles lack sex chromosomes, and their gender is primarily determined by the incubation temperature of the egg during development—cooler temperatures yield more males while warmer temperatures yield more females,” said Rosenfeld, who also is an associate professor of biomedical sciences in MU’s College of Veterinary Medicine. “Previously, our research team found that exposure to BPA might override the brain development of male turtles and could induce female type behaviors. Our goal for this research was to determine the genetic pathways that correlate to the behavioral changes we identified.”

Researchers examined whether BPA and ethinyl estradiol (EE), a hormone found in birth control pills, affect the global regulatory pathways of the brain. The same turtles from earlier behavioral testing were subjected to a gene expression analysis and 235 genes were identified as being altered in turtles exposed to BPA. The gene expression changes identified in the BPA group were found to significantly alter mitochondrial and ribosomal pathways.

Mitochondria are the “power house” for cells and are responsible for breaking down and converting nutrients into usable energy. Ribosomal pathways produce proteins, which are needed to repair damage and direct chemical processes. Increased energy production in brain cells can thus affect cognitive flexibility and memory.

“Metabolic pathways are not well documented in turtles. We were able to use human metabolic models to infer pathway changes in turtles,” said Scott Givan, associate director of MU Informatics Research Core Facility and a co-author of the study. “After analyzing the genes, we were able to link gene expression changes to behavioral changes.”

Rosenfeld notes that this is the first study to show a correlation between changes in gene expression patterns and behavioral changes in turtles exposed to endocrine disrupting chemicals. “Correlation of altered gene expression patterns with the behavioral changes of the animals almost a year after the original exposure indicates that developmental exposure to BPA can lead to long-lasting and likely permanent effects on neurobehavioral responses,” Rosenfeld said.

“Transcriptomic alterations in the brain of painted turtles (Chrysemys picta) developmentally exposed to bisphenol A or ethinyl estradiol,” recently was published in Physiological Genomics and is slated to be featured as a cover illustration on the journal’s website. Lindsey Manshack, a graduate student in Rosenfeld’s lab in MU’s Bond Life Sciences Center authored the study. Dawn Holliday, adjunct assistant professor of pathology and anatomical sciences in the MU School of Medicine and an associate professor of biology at Westminster College in Fulton, Mo., and Sharon Deem, director of the Saint Louis Zoo Institute for Conservation Medicine, contributed to the study. Funding was provided by Mizzou Advantage, the Office of Research and the Bond Life Sciences Center at the University of Missouri. The content is solely the responsibility of the authors and does not necessarily represent the official views of the funding agencies.