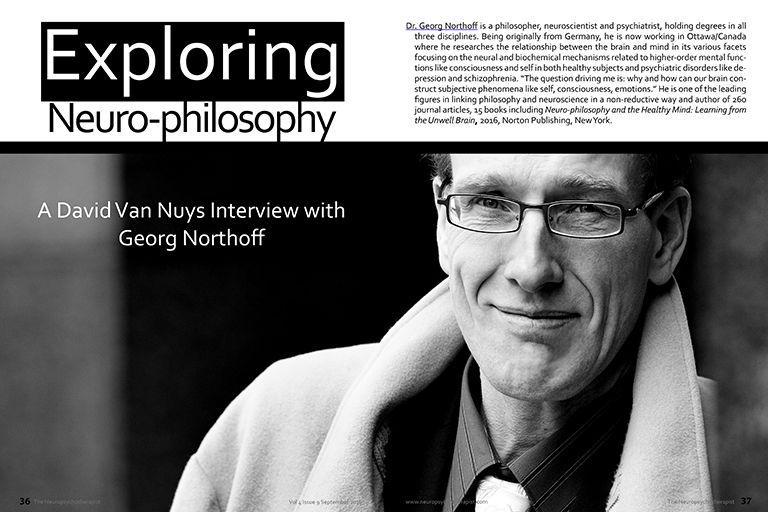 Dr. Dave: I'm glad to have you here. And I'm especially pleased to have you on the show because of your credentials as a philosopher. I know we won't get into this, but I had run across the notion of applied philosophy and people who are essentially functioning as counsellors or psychotherapists whose credentials were “applied philosopher”. And so that's something I meant to look into. However, I think your direction, your expertise, is quite different than that.

Dr. Georg Northoff: Yeah, I am a philosopher, neuroscientist, and psychiatrist; you can see already by the triangle of my education and also the work I am doing. And applied philosophy would have a very different sense in my context. It would really mean that I try to bring in some empirical evidence which we gather. In sciences, I try to link that with the kinds of questions we have in philosophy which usually concern questions of knowledge—what can we know; epistemological questions, and knowledge of existence and reality, ontology, and metaphysics. And of course there are also other domains of philosophy. And I’m not really trying something new: when you look back into the history of philosophy and the beginning of modernity, people like Descartes, Spinoza, Leibniz, Kant always linked the conceptual, the ontological, with the empirical. It's only in the 20th century that the two really diverge from each other. I am trying to bridge the gap. And the bridge is of course the brain.

Dr. Dave: Yeah. Now as you pointed out, you've got degrees in psychiatry, neuroscience, and philosophy. In what order did you get them, those degrees? Which came first?

So in order to deal with the brain you had to study medicine. So that's why I studied medicine. But I always wanted to study philosophy. I never wanted to study philosophy alone without science. So probably nowadays I would have studied philosophy/neuroscience, but at the time I studied philosophy/medicine. I did this early. And when you finish medicine you have to do some kind of residency, because otherwise your degree is worthless. So what is closest to the brain is psychiatry, and then I became a psychiatrist. And then I continued all three, and now I don't care anymore about the distinctions.

Dr. Dave: Yeah. Some people might wonder, "Well, what's the relevance of philosophy in today's scientific world? Science tells us everything. Why do we need philosophy?" Of course I don't think that, but . . . [Laughs]

Northoff: [Laughs] Yeah. Good question. I start with the sentence by Albert Einstein: "You only see what your theory tells you," meaning your theory and your concept dictate how and what you see and observe in your science. And every good scientist in history and nowadays knows that data, empirical facts, experiments go closely hand-in-hand with concept, theory, and certain predispositions.

Real progress in science comes when you combine; that's the genesis. Now with regard to the brain, you can't be really . . . many fellow neuroscientists might contradict me, but nevertheless we don't really know how this brain works. In the case of the heart, we really know it's a pump, and pumps blood—that's the purpose of the heart, and everything revolves around it. Once you know that then it's very easy to know, OK, it's a muscle structure and it's pumping and all of that.

In the case of the brain, we really don't know yet. And so what you need to develop is different models and theories of brain and then the corresponding empirical experiments. That's what we're trying to do.

This has been an excerpt from Exploring Neuro-philosophy. To read the full article, and more excellent material for the psychotherapist, please subscribe to our monthly magazine.