Essential Guide to the Brain Part 5

The Psychotherapist’s Essential Guide to the Brain – Part 5 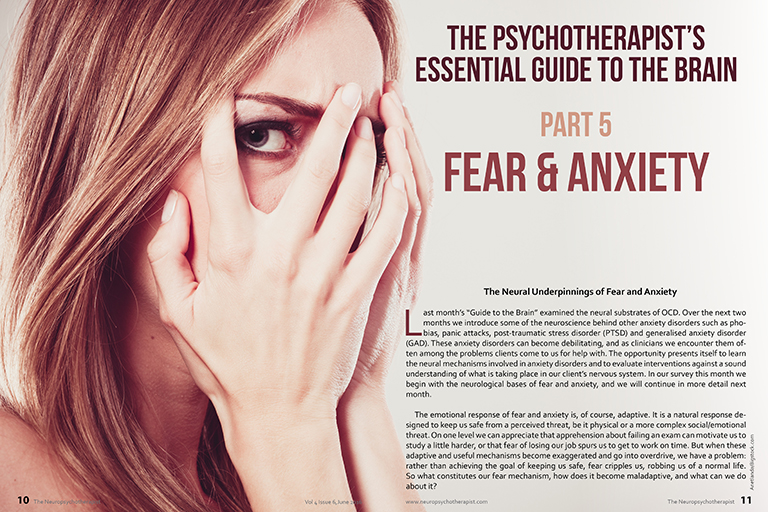 Last month’s “Guide to the Brain” examined the neural substrates of OCD. Over the next two months we introduce some of the neuroscience behind other anxiety disorders such as phobias, panic attacks, post-traumatic stress disorder (PTSD) and generalised anxiety disorder (GAD). These anxiety disorders can become debilitating, and as clinicians we encounter them often among the problems clients come to us for help with. The opportunity presents itself to learn the neural mechanisms involved in anxiety disorders and to evaluate interventions against a sound understanding of what is taking place in our client’s nervous system. In our survey this month we begin with the neurological bases of fear and anxiety, and we will continue in more detail next month.

The emotional response of fear and anxiety is, of course, adaptive. It is a natural response designed to keep us safe from a perceived threat, be it physical or a more complex social/emotional threat. On one level we can appreciate that apprehension about failing an exam can motivate us to study a little harder, or that fear of losing our job spurs us to get to work on time. But when these adaptive and useful mechanisms become exaggerated and go into overdrive, we have a problem: rather than achieving the goal of keeping us safe, fear cripples us, robbing us of a normal life. So what constitutes our fear mechanism, how does it become maladaptive, and what can we do about it?
The Rats of Fear

Joseph LeDoux has devoted his career to mapping out the fear network of the brain. By conditioning rats in order to elicit a fear response associated with a certain stimulus (a tone), LeDoux was able to trace the neural pathways of fear. His early experiments involved lesioning the auditory cortex to prevent the rats from “hearing” the feared stimuli—the assumption was that without auditory processing the rats would not respond with fear. Surprisingly, the rats continued to respond to the tone with a fear response after the lesion. How could the animals know to fear the tone without being able to process it in their auditory cortex? The fear network was unaffected, meaning that its mechanism must be operational before auditory information reaches the auditory cortex; that is, there must be a pathway other than that of the thalamus–cortex. And so there is. LeDoux developed the neuroscience of fear based on a non-cortical pathway he called the “low road”—a fast, direct pathway that requires no higher-order thought to activate a physiological response to a threat.

LeDoux’s rats, which had learned to fear a specific tone, processed incoming auditory information from the thalamus directly to the amygdala—the small, almond-shaped fear learning centre that was covered in Part 2 of this guide. LeDoux demonstrated the important role the amygdala plays in learning and memory. He showed that the auditory information entering the amygdala, specifically the basal and lateral aspects (known as the basolateral complex of the amygdala or BLA), has not been analysed by higher cortical processing, and that seemingly any tone that is similar to the conditioned tone will trigger a warning from the amygdala. In fact, all sensory information from the thalamus first arrives at the amygdala—the fast “low road” of information processing. The “high road” is a slower pathway that processes sensory information through the cortex before meeting the “low road” back at the amygdala. This slower pathway adds much more detail and character to the raw data, as it is analysed in “smarter” parts of the brain. After our initial jump at a snake-like object on the ground, for example, our “high road” processing recognises the object as a hose rather than a snake, and this discrimination down-regulates the fear response. The output of the amygdala is connected to many neural structures that activate either the freeze response or the fight-or-flight response together with other systems to raise arousal levels and direct attention. It is the fast, unconscious “low road” of information processing that may be responsible for initiating panic attacks that appear to come out of nowhere. As an oversensitive amygdala springs into action, it instantly draws oxygen-rich blood flow from areas such as the right orbitofrontal cortex and anterior cingulate cortex (important for modulating the response of the amygdala), leaving the sufferer with that out-of-control feeling of dread and/or panic as a cascade of stress chemicals activates their body to deal with imminent danger.
The implicit emotional learning of the amygdala is unlike the explicit memory of places, events, and facts that is mediated by the hippocampus. The explicit learning of the contextual details of a fear-related incident is hippocampal-dependent. The memories of context by themselves are not emotional; emotional aspects of memory require amygdala activity and the pairing of contextual elements with the emotional representation of those elements. Unlike the rats in LeDoux’s lab, we can make emotional associations just by recognising a dangerous situation from context, our amygdala coming into play to encode an emotional element to the learning—a helpful skill to have when the feared stimuli are oncoming trucks, exposed power lines, guns, or strange men offering a ride.