Essential Guide To The Brain Part 4 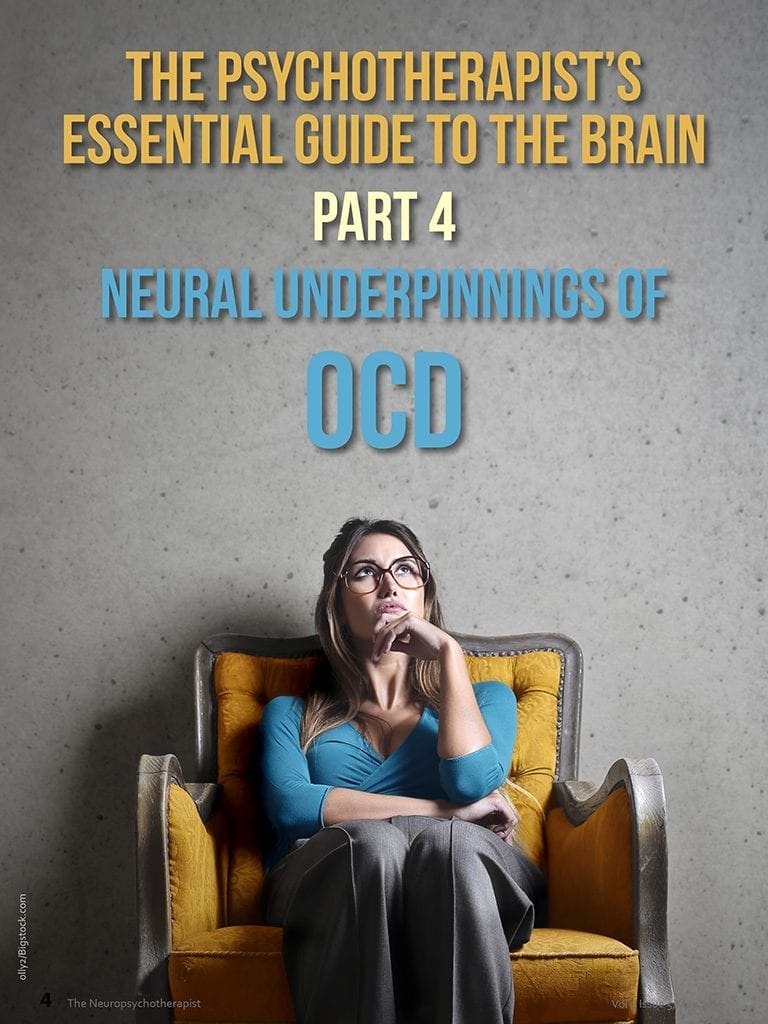 The Neural Underpinnings of OCD

Obsessive–compulsive disorder (OCD) is a common anxiety condition characterised by recurring, upsetting thoughts (obsessions) that are typically along themes of contamination, doubts, the need to order things, impending doom, or aggression, just to name a few. These obsessions are managed by ritualistic actions (compulsions) such as hand washing, checking, ordering, counting, praying, and other sequences of action or thought. People who suffer from OCD feel driven to perform specific compulsions to mitigate the anxiety generated by the obsessive thoughts. One of the more common OCD experiences is that of feeling contaminated and being compelled to wash the hands or the entire body to be clean again. The feeling of being clean either never happens or is fleeting, despite excessive efforts to wash. Another typical example is persistent doubt upon leaving the house that the house is locked and windows closed or that the oven has been turned off, and such persistent thoughts lead to compulsive checking of things (like the locks and windows)—a distressing state that intrudes on the harmonious flow of life and torments the sufferer when they are not in a position to do the checking.

What do we know about the neurobiological underpinnings of OCD? As brain imaging technology becomes more sophisticated, we are starting to see specific brain structures that are implicated in OCD and some of the neurochemicals involved in modulating the OCD response. This month we will consider the circuits involved in OCD and the treatment ramifications.
At a Parisian hospital in 1967, Jean Talairach and his team were trying to find the origins of seizures in epileptic patients when they discovered that the stimulation of the cingulum resulted in compulsive behaviours. The cingulum, located directly above the corpus callosum in the cingulate gyrus, is involved in complex repetitive movements and is implicated in a bigger circuit involved in OCD. This more elaborate neural circuit has become known as the OCD loop (Modell, Mountz, Curtis, & Greden, 1989) that includes the orbitofrontal cortex (OFC), striatum, and thalamus.

The OFC is involved with the cognitive processing of decision making and expectation. It is an emotionally attuned part of the frontal cortex that is sensitive to threatening situations. Connected to the OFC is information from the striatum, a major part of the basal ganglia involved in reward and habit formation. It is the striatum that allows us to multitask by running automatic behaviour in the background, like the student who plays with her hair while listening to a challenging lecture. Part of the striatum, the caudate nucleus, working with the putamen, acts rather like an entrance or gate within the basal ganglia to activate or attenuate automatic responses. Part of what is believed to be happening in OCD is that when the striatum is not doing its gatekeeping job properly (i.e., the “entrance” is open), obsessive thoughts and compulsions can flood the OFC uninhibited. There may be a “warning” from the amygdala about germs, for example, that prompts thoughts of washing hands. The OFC responds to such incoming information by reinforcing compulsive behaviours (such as hand washing) to “make things right”. But a single action doesn’t satisfy the OFC, because there is an open loop happening that recycles the “warning” signal (that there is still contamination, for example) back to the OFC. This hyperactivity of the OFC and the lack of inhibition by the dorsolateral prefrontal cortex (DLPFC) of the striatum could be one of the main causes of OCD.

Normally there is a balance between the OFC, basal ganglia, and thalamus that gives us flexibility as we activate or inhibit, in a situationally appropriate way, responses to thoughts and the environment. When the balance breaks down and there is less inhibition, as in the case of Tourette’s syndrome, automatic behaviours become very difficult to inhibit. An OFC flooded with input from the basal ganglia needs help in inhibiting the automatic behaviour that is trying to “make things right”. This help can come from the DLPFC—the part of the frontal cortex involved in positive, goal-orientated, reflective, and rational behaviour—which can assist the more emotionally driven OFC in putting the brakes on the obsessive–compulsive loop. This is achieved by strengthening the control the OFC has over the amygdala to shut down the fear network. The DLPFC can strengthen attentional skills (such as presence focus, reframing, tolerance, and acceptance) and override the automatic and habitual flow from the OFC, in effect distracting the OFC from autopilot and training it to engage something more beneficial than the habitual OCD response. As clients in therapy learn to ignore the compulsive urges and see the behaviour as non-functional, they can establish stronger connections from the OFC to the amygdala and regain control over what was an uninhibited autopilot of fear.

There is theory that postulates a delayed maturation of the frontal cortex–striatum circuitry, where the maturation of the cingulate is a causal factor in OCD (Rosenberg & Keshavan, 1998). Neuroimaging studies have shown higher activity in the OFC, ACC, and striatum in OCD patients than non-OCD subjects. 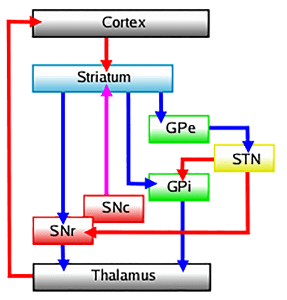 A closer look at the loop

The OFC and anterior cingulate cortex (ACC) connect to the basal ganglia and the thalamus in what is known as the cortico–basal ganglia–thalamocortical (CBGTC) loop (Alexander, DeLong, & Strick, 1986). There are “direct” and “indirect” pathways through the basal ganglia that create an equilibrium of response to situations. This figure shows both pathways. The direct pathway is an excitatory one, whereas the indirect pathway is inhibitory. So it may be that relatively excessive activity in the direct pathway in these loops could result in positive feedback loops leading to OCD (Saxena & Rauch, 2000).

Neurochemistry of OCD
The limbic component of the striatum is the nucleus accumbent, also referred to as the “pleasure centre” of the brain. This area, rich in dopaminergic neurons, plays a central role in reward behaviour. Engaging in OCD behaviour to down-regulate the stress response and resolve internal anxiety is also inherently rewarding, as it increases the dopaminergic activity in the brain. Other neurotransmitters that seem to be important in the OCD loop are glutamate and GABA activity between the OFC and caudate nucleus, the globus pallidus, and the thalamus. Dopamine modulates the activity of the caudate nucleus, and serotonin modulates the activity of the globus pallidus. Although there have been no prevailing serotonin deficits observed in OCD patients, when they are placed on serotonin reuptake inhibitors (SRIs) they can show improvements (anywhere from 40–60% of patients can show improvements of symptoms). Similarly, when people are given a dopamine antagonist, it can be effective in reducing motor tics, indicating dopamine as a possible modulator of behavioural compulsions in OCD.
Psychopharmacological therapy today revolves around the use of SRIs/SSRIs, even though there is not a good explanation as to why increasing serotonin levels improves OCD symptoms. Clomipramine (Anafranil) was the first SRI to demonstrate improvement in some cases of OCD. It blocks 5-HT (serotonin) and norepinephrine uptake and has some dopamine receptor-blocking function. This class of SRI has more side effects than more recent SSRIs such as fluoxetine (Prozac), sertraline (Zoloft), paroxetine (Paxil), and fluvoxamine (Luvox). Sometimes anxiolytics like benzodiazepines are used as well to combat the anxiety associated with OCD. It is difficult to judge how effective these pharmacological therapies are, and most approaches are a combination of chemical intervention and some form of cognitive behavioural therapy.

Therapeutic Intervention
As stated above, the DLPFC is the brain region that can be utilised to break the OCD loop by reorientation of the OFC away from its obsessive–compulsive drive. By activating the DLPFC (in conjunction with the hippocampus) to take executive control over thoughts and behaviour, recognising that OCD behaviour is not adaptive, and laying down new neural traces that are more adaptive, the OFC can be retrained. The most common approach to this is through CBT techniques such as exposure and response prevention (ERP), first developed in the 1970s. By exposing clients gradually and systematically, with careful cognitive processing, the abnormal portico-ganglia circuit can be rewired to function in a much more adaptable and flexible way. Research has indicated that OCD patients who engage in such CBT therapy do have decreased metabolism in the right caudate nucleus in the basal ganglia, a decrease in thalamus activity, and an increase in right-side ACC activity (Linden, 2006; Saxena et al., 2009). A practical and up-to-date workbook for clients is Brain Based Therapy for OCD: A Workbook for Clinicians and Clients, by John Arden.

Great article!
As a naturopath, I find that administering N-acetylcysteine to my clients with OCD, has shown promising results as a treatment intervention. N-acetylcysteine works by modulating GABA and dopamine in the brain. If you are interested in reading more about it, this research paper by Berk et al. 2013 explains its mechanism of action in the brain: ‘The promise of N-acetylcysteine in Neuropsychiatry’

Thanks Micaela, I’ll have a look at that paper.

For those interested, here’s the article Micaela was talking about https://www.ponderapharma.com/wp-content/uploads/2014/06/The-promise-of-N-acetylcysteine-in-neuropsychiatry.pdf