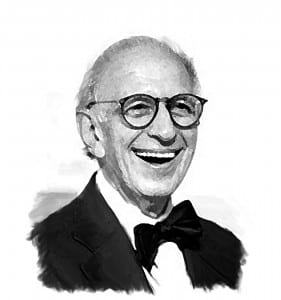 Eric R. Kandel was born in Vienna on November 7, 1929. Kandel grew up in the vibrant Viennese culture, but as a Jew, experienced the anti-Semitism that was also a feature of Viennese life, and increasingly so as Nazi influence grew in the lead-up to the Second World War. In 1938 Hitler marched into Vienna, and the overwhelming reception by the Viennese public made an indelible impression on Kandel. Austrian Nazi mobs went about the city beating up Jews and destroying their property in vicious attacks.

At this point Kandel’s parents realised it was time to flee Austria, and made plans to emigrate to New York where Kandel’s uncle had emigrated a number of decades earlier. Even with affidavits from the uncle that the family would be supported in New York, it took about a year before the family could start the emigration process. Kandel’s mother’s parents left first, in February 1939, then he and his brother in April, and finally his parents in September, only days before World War II broke out.

These dramatic events in the young boy’s life may have had an part in determining his later interest in the mind and the contradictions and complexities of human behaviour, as Kandel himself reflects in his autobiography.

The family settled in Brooklyn with Kandel’s mother’s parents. Kandel’s grandfather tutored him in Hebrew in 1939 so that he could be eligible for a scholarship to the Yeshiva of Flatbush, an excellent Hebrew parochial school. Kandel learned to speak fluent Hebrew, and entered the Yeshiva in the fall of 1939.

In 1944 he graduated from the Yeshiva of Flatbush and went on to Erasmus Hall High School, a local public high school in Brooklyn that was then academically very strong. Later he won a scholarship to Harvard College.

After undergraduate studies majoring in 19th-and 20th-century European history and literature, Kandel decided to pursue psychoanalysis due to the influence of Ernst and Marianne Kris. He had made a friend at Harvard, Anna Kris, who had also emigrated from Vienna with her parents. The parents were both prominent psychoanalysts from Freud’s circle, and it was their influence that shifted Kandel’s focus toward the mind.

To become a practising psychoanalyst, Kandel discovered it was best to first become a physician and then train as a psychiatrist. In the summer of 1951 he started the required introductory courses at Harvard with the intention of becoming a physician. A few months later he was accepted into the NYU Medical School.

During his studies of medicine Kandel became very interested in the biological basis of medical practice and wanted to learn something of the biology of the mind. To extend this learning he took an elective period at Columbia University with Harry Grundfest, the most intellectually interesting neurobiologist in the New York area, who was looking at the importance of the biology of the brain for psychoanalysis. In the Grundfest lab Kandel found a place of fascination and enjoyment.

Around this time, Grundfest introduced Kandel to a number of papers by Stephen Kuffler, a Viennese-trained physician turned physiologist, about the excitation and inhibition in the dendrites and soma of isolated sensory nerve cells of the lobster and crayfish. Through these papers Kandel saw the power of invertebrate neurobiology—a perspective that would propel him into an extraordinary career.

Kandel graduated from medical school in June 1956 and married Denise Bystryn, a Jewish–French woman whose experiences had somewhat paralleled Kandel’s in a number of ways. After a short honeymoon Kandel started his internship at Montefiore Hospital.

He continued at Grundfest’s lab, making microelectrodes and obtaining and interpreting intracellular recordings from the crayfish giant axon. Based on Kandel’s time at the lab, Grundfest offered to nominate him for a position at the NIH, and he was accepted by Wade Marshall, Chief of the Laboratory of Neurophysiology.

By thinking about problems in psychiatry and psychoanalysis in biological terms, Kandel thought that the cell and molecular mechanisms of learning and memory would be an ideal area to research. He wanted to study the hippocampus in cellular terms and focus on the pyramidal cells—an easy target for microelectrodes. He hypothesised that the properties of the pyramidal cells themselves might reveal something about memory storage.

Kandel joined forces with Alden Spencer, who was also interested in the biology of learning and memory, to study the hippocampus. Together they had success in obtaining intracellular recordings from hippocampal neurons and gained a more fine-grained understanding of these neurons, but not fine enough to explain the ability of the hippocampus to store memory. They turned their attention from the properties of individual neurons to the functional interconnectedness of neurons in an attempt to uncover the mystery of memory.

Becoming aware of the enormous number of neuronal interconnections in the hippocampus, the researchers realised it was not the place to begin to decipher the mechanisms of memory, and so turned to a more simple animal model. Kandel turned to the giant marine snail, Aplysia, as his subject of choice to discover basic memory mechanisms. After completing his psychiatric residency, he successfully applied for an NINCDS postdoctoral fellowship for work to be done in the laboratory of Ladislav Tauc in Paris. Tauc had a strong background in physics and biophysics and was an expert on the Aplysia. After a successful 16-month stint in Paris, Kandel returned to the USA and by the winter of 1965 was continuing his work with Aplysia at NYU again with neurophysiologist Spencer. A year later, along with James Schwartz, the three formed the nucleus of the Division of Neurobiology and Behavior at NYU.

It was this research group that went onto describe the rich repertory of learning in Aplysia from a neurobiological perspective and how these observations could be extrapolated to higher-order cognitive features in mammals. They identified changes in synaptic strength, through experience, as a key feature of memory creation.

Kandel went on to do groundbreaking research on the molecular foundations of the memory process, describing the role of protein synthesis in synaptic plasticity, and the mechanisms behind both short-and long-term memory formation.

In 1983 Kandel became a senior investigator at the Howard Hughes Medical Research Institute where he continued examinations of the molecular mechanisms underlying the synaptic changes of memory storage and further explored the distinction between short- and long-term memory.

After many decades of research into the basic mechanisms of memory, Kandel has come full circle, back to studying the hippocampus. Along with other labs looking at memory, it has been established that the cAMP, PKA, and CREB switch were required for long-term forms of synaptic plasticity in the hippocampus, and also for spatial memory. In the course of this work, Kandel and his team began to explore how explicit memory storage for spatial perception affects the internal representation of space.

Kandel remains a giant in the field of neuroscience, and his lifetime of work has made remarkable inroads into our understanding of how the brain works. We are indebted to his life and passion.