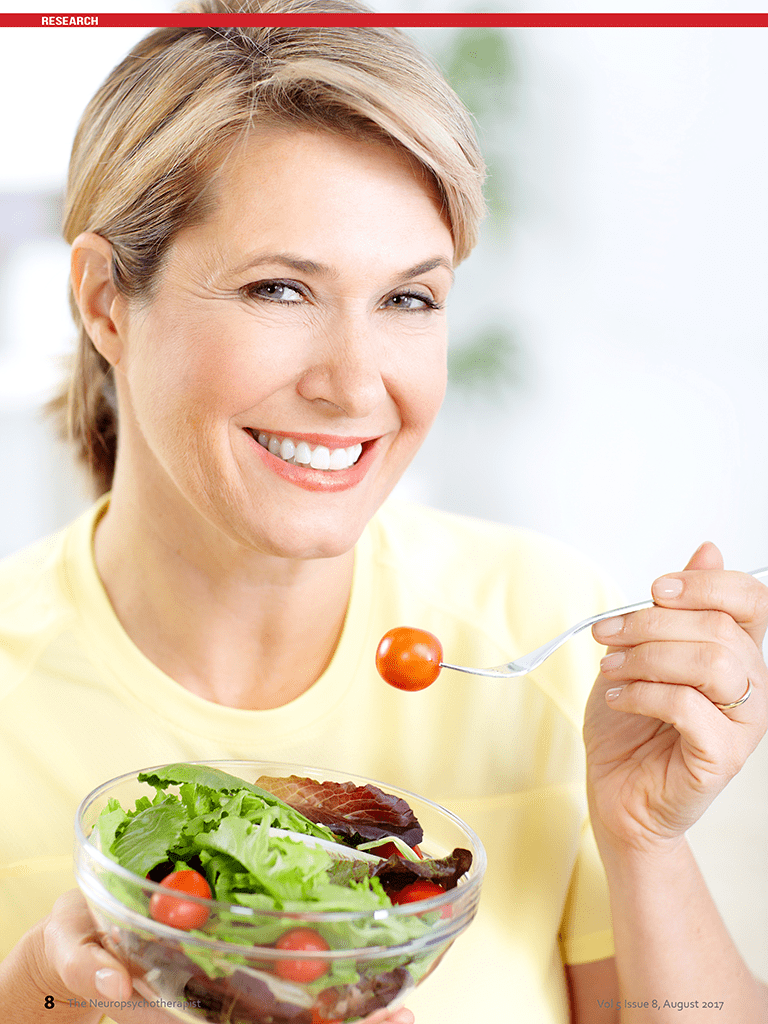 How often have we heard the saying that we are what we eat, with the view that the foods we eat can directly influence our state of mind and physical health? This statement may well be true for the more physical aspects of health. Indeed, there is a well-established link between nutrition and physical health: it is commonly assumed that healthy eating habits have a positive influence on our health while unhealthy eating habits can contribute to poor health outcomes with long-lasting effects. Yet, as you read this, you may be thinking to yourselves . . . but what about the link between nutrition and mental health?

In recent years, there has been growing interest in exploring the role of diet in mental health and how important it is. After all, doesn’t nutrition fuel our brain and affect all of its functions, including mood? Observational studies from across various age groups and countries have in general shown a positive association between an overall healthy eating pattern and mental well-being, especially in relation to common mental health disorders such as depression and anxiety (Lai et al., 2014; O’Neil et al., 2014; Psaltopoulou et al., 2013; Sanchez-Villegas et al., 2009). In these previous studies, a healthy eating pattern was generally found to be based on diets high in fruits and vegetables, unprocessed grains and fish, and low in processed foods—a pattern consistent with what is known as the Mediterranean diet (Psaltopoulou et al., 2013; Sanchez-Villegas et al., 2009).

The role of fruit and vegetable consumption in mental health has received particular attention. Fruits and vegetables are rich in nutrients, and their protective effects in relation to chronic illnesses such as cardiovascular disease and several types of cancer are well known (Wang et al., 2014; World Cancer Research Fund/American Institute for Cancer Research, 2007). In addition, diets low in fruit have been reported to be the leading dietary risk factor for the global burden of disease (Lim et al., 2012). There is also growing evidence (particularly from cross-sectional studies where fruit and vegetable intake and mental health outcomes are measured at the same time), which suggests a potential link between the consumption of fruit and vegetables and depression and psychological distress (Liu et al., 2016). However, to build stronger evidence, more prospective studies are needed where individuals are followed up over a period of time and the association between potential risk factors and a health outcome can be examined (Kingsbury et al., 2016; Mihrshahi, Dobson, & Mishra, 2015).

Modernisation has led to significant changes in global food consumption patterns and other lifestyle behaviours, together with an increase in mental disorders. Common mental health disorders currently account for the greatest burden of disability worldwide and more than a quarter of the global burden of nonfatal diseases. Research on modifiable lifestyle risk factors can help inform preventative health strategies. Being affected by mental health disorders such as depression later in life is also associated with increased morbidity and mortality. Therefore, the objective of our study (recently published in BMJ Open; see Nguyen, Ding, & Mihrshahi, 2017), was to examine the association between fruit and vegetable consumption and the incidence and prevalence of psychological distress in middle-aged and older Australians participating in the Sax Institute’s 45 and Up Study (https://www.saxinstitute.org.au/our-work/45-up-study/).

Perhaps a more novel aspect of this study was the additional, separate analysis of the relationship of diet and mental well-being among men and women. Surprisingly, fruit and vegetable consumption appeared to be protective for women but there were no clear associations in men over the three-year follow-up period. A mechanism that could explain a true physiological difference between men and women remains unclear and requires further investigation. It is also possible that women more accurately reported their consumption than men, and that this may have contributed to the differences observed.
Although more research is needed, there are several potential mechanisms that could explain the association between fruit and vegetable consumption and psychological distress. For example, fruit and vegetables are high in antioxidants such as vitamins C and E that can help reduce oxidative stress (free-radical damage) and inflammation, which can be harmful to mental health. As well, deficiencies in B vitamins, such as folic acid (vitamin B9), influence mood regulation and have also been associated with depression. Prebiotic foods have also been linked to improved mental health. It appears, therefore, that fruit and vegetables may affect several biological pathways related to mental health. However, more studies are needed to further investigate these mechanisms.

In understanding the findings of this study, it is important to highlight several points. First of all, the questionnaire used was limited in its dietary assessment and there could be several dietary confounders (such as total energy intake) as well as other non-dietary factors (such as a history of mental illness) that were not accounted for. Second, assuming that there was a causal link between fruit and vegetable intake and psychological distress, the direction of the association could not be inferred—that is, it was unclear whether eating a good diet with plenty of fruit and vegetables promoted mental well-being or whether poor mental health led to a poorer diet with less fruit and vegetables. We tried to minimise the possibility of “reverse causation” (i.e., that poor mental health leads to a poor diet) in our study by excluding participants who were being treated for depression or anxiety, were taking antidepressant medication, or had high to very high levels of psychological distress. Whilst several prospective studies have not found evidence for reverse causation, a recent study suggests that the association between fruit and vegetable consumption, other health behaviours, and mental health is complex and potentially bidirectional (Kingsbury et al., 2016). Third, our study was observational in nature, which means that causality could not actually be inferred from the associations observed. One should also keep in mind that those who consume healthy amounts of fruit and vegetables may also be engaging in other healthy lifestyle behaviours, such as being physically active, which together could have contributed to lower psychological distress. In other words, eating healthily, including a high consumption fruit and vegetables, goes hand in hand with other healthy behaviours that can all contribute to psychological well-being.

Whilst the evidence for an association between fruit and vegetable consumption and psychological distress will continue to be informed by future research in this field, the take-home message for readers would be that consuming a variety of fruit and vegetables as part of a balanced diet will ensure an adequate intake of a range of antioxidants and other nutrients, which may be beneficial not only for improved psychological well-being but also for overall health. As a recent article in The Lancet Psychiatry recently concluded (Sarris et al., 2015, p. 271), it appears that diet is “as important to psychiatry as it is to cardiology, endocrinology and gastroenterology”.

This short article is based on the article, “Fruit and Vegetable Consumption and Psychological Distress: Cross-Sectional and Longitudinal Analyses Based on a Large Australian Sample” by Binh Nguyen, Ding Ding, and Seema Mihrshahi, recently published in BMJ Open (2017).