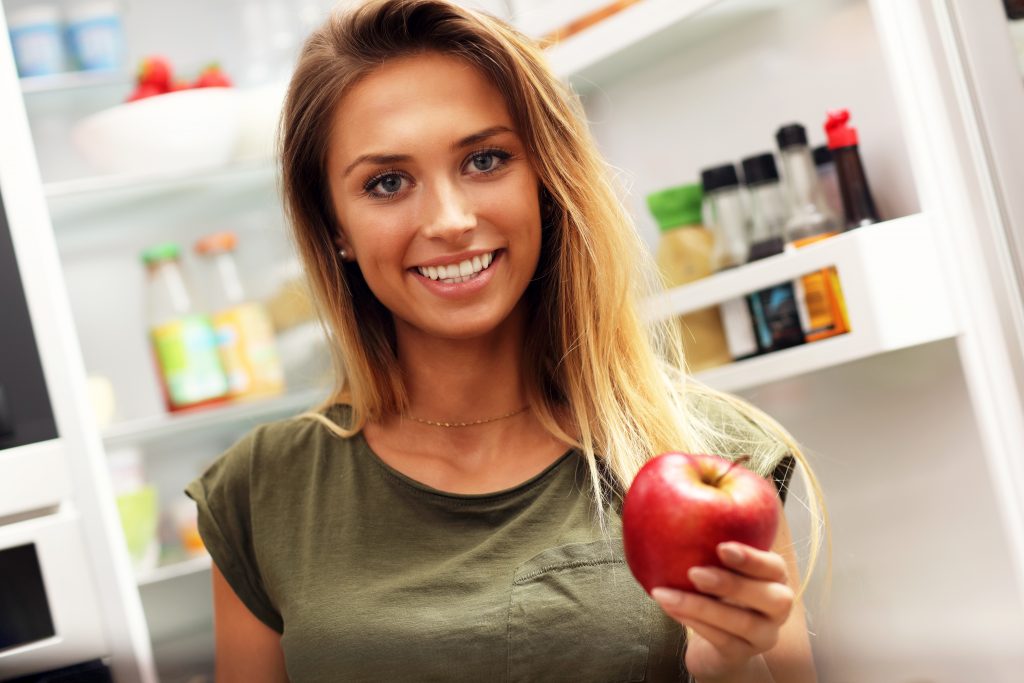 Picture of young woman with apple over fridge

People who eat vegetables, fruit and whole grains may have lower rates of depression over time, according to a preliminary study released today that will be presented at the American Academy of Neurology’s 70th Annual Meeting in Los Angeles, April 21 to 27, 2018.

The study found that people whose diets adhered more closely to the Dietary Approaches to Stop Hypertension (DASH) diet were less likely to develop depression than people who did not closely follow the diet. In addition to fruit and vegetables, the DASH diet recommends fat-free or low-fat dairy products and limits foods that are high in saturated fats and sugar. Studies have shown health benefits such as lowering high blood pressure and bad cholesterol (LDL), along with lowering body weight.

“Depression is common in older adults and more frequent in people with memory problems, vascular risk factors such as high blood pressure or high cholesterol, or people who have had a stroke,” said study author Laurel Cherian, MD, of Rush University Medical Center in Chicago and a member of the American Academy of Neurology. “Making a lifestyle change such as changing your diet is often preferred over taking medications, so we wanted to see if diet could be an effective way to reduce the risk of depression.”

For the study, 964 participants with an average age of 81 were evaluated yearly for an average of six-and-a-half years. They were monitored for symptoms of depression such as being bothered by things that usually didn’t affect them and feeling hopeless about the future. They also filled out questionnaires about how often they ate various foods, and the researchers looked at how closely the participants’ diets followed diets such as the DASH diet, Mediterranean diet and the traditional Western diet.

“Making a lifestyle change such as changing your diet is often preferred over taking medications, so we wanted to see if diet could be an effective way to reduce the risk of depression.”

Participants were divided into three groups based on how closely they adhered to the diets. People in the two groups that followed the DASH diet most closely were less likely to develop depression than people in the group that did not follow the diet closely. The odds of becoming depressed over time was 11 percent lower among the top group of DASH adherers versus the lowest group. On the other hand, the more closely people followed a Western diet—a diet that is high in saturated fats and red meats and low in fruits and vegetables—the more likely they were to develop depression.

Cherian noted that the study does not prove that the DASH diet leads to a reduced risk of depression; it only shows an association.

“Future studies are now needed to confirm these results and to determine the best nutritional components of the DASH diet to prevent depression later in life and to best help people keep their brains healthy,” said Cherian.