Decoding the structure of Huntington’s 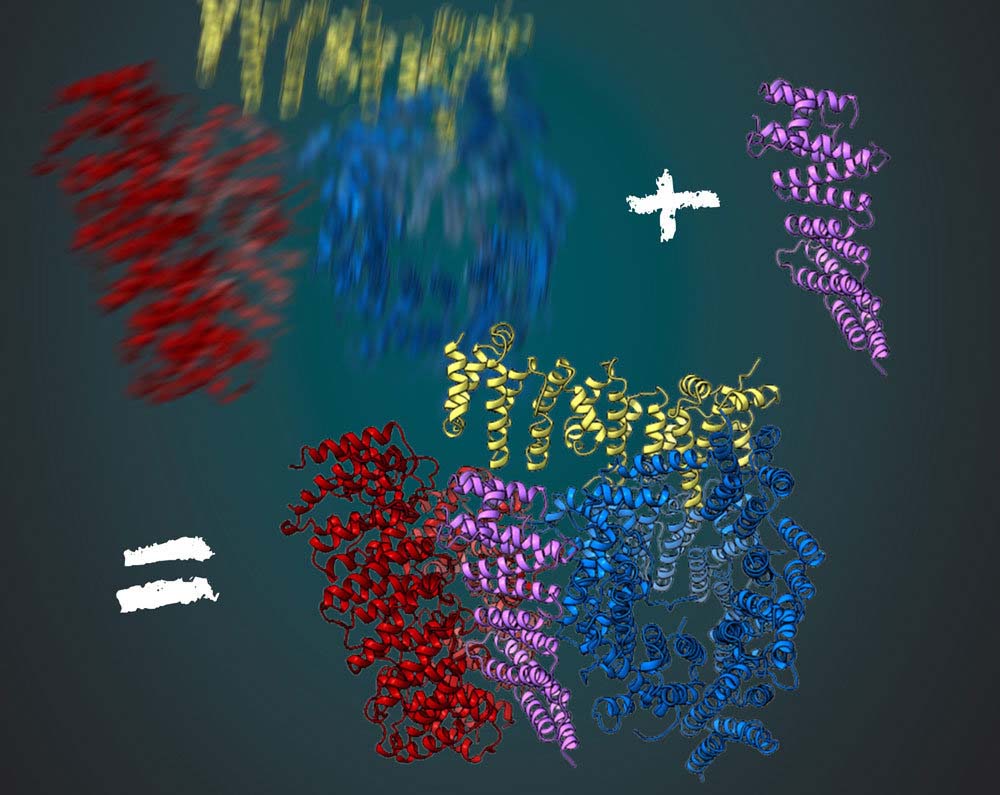 The protein huntingtin consists of three flexible regions, shown in red, yellow and blue. Together with its interaction… [more]
© MPI of Biochemistry/ Illustration: Gabriele Stautner, ARTIFOX

Mutations on a single gene, the huntingtin gene, are the cause of Huntington’s disease. They lead to an incorrect form of the correspondent protein. With the help of cryo-electron microscopy researchers from the Max Planck Institute of Biochemistry in Martinsried and Ulm University have now decoded the three-dimensional, molecular structure of the healthy human huntingtin protein. This now enables its functional analysis. An improved understanding of the structure and the function of the huntingtin protein could contribute to the development of new treatment methods in the future.

Huntington’s disease often begins with emotional disturbances and is characterized by involuntary muscle movement and loss of mental ability. Until today, the neurological disease is one of the hereditary diseases still incurable and fatal. The protein HTT, also called huntingtin, plays the central role in Huntington’s disease. For 25 years it has been known that mutations of the huntingtin gene, which is the blueprint for the same protein, cause Huntington’s disease.

Although researchers have worked on it for many years, there are still many hurdles to overcome. Now Rubén Fernández-Busnadiego from the Max Planck Institute of Biochemistry and Stefan Kochanek, head of the Department of Gene Therapy at the University Hospital Ulm, have succeeded in decoding the molecular, three-dimensional structure of the huntingtin protein.

Stefan Kochanek and his team have been working on the production and purification of huntingtin for a long time. What has prevented a detailed analysis of the protein in recent decades? Fernández-Busnadiego, an expert in cryo-electron microscopy, mentions two main factors: “First of all, cryo-electron microscopy has only been optimized in recent years to look at protein structures with almost molecular resolution. The second reason is that the huntingtin protein is very flexible in its structure. Just now, we have found also a solution for this problem.” During the analysis, pictures of the protein are being taken from different perspectives under the microscope. The three-dimensional molecular structure can be computed from the large number of resulting images. For this, the protein must always be in the same conformation. Fernández-Busnadiego explains: “This would be similar to a person being photographed in the dark. If the person does not stand still for a while, the shot will be blurry.”

“Although we have known for some time that the mutation of the huntingtin gene has severe consequences, we still know relatively little about the function and tasks of the healthy protein.”

To get a clear picture, the researchers in the Kochanek lab have been looking for other proteins that interact with huntingtin and stabilize it. That worked for the protein HAP40. “Huntingtin in connection with HAP40 is stabilized in a particular conformation. Thus, averaged over many pictures, we were able to derive the three-dimensional structure,” said Kochanek. “If we remain in the analogy of the photo in the dark, then the protein acts like a chair for the photographed person. Sitting on it, the person moves much less and the image is much sharper with the same exposure time,” adds Fernández-Busnadiego.

“Although we have known for some time that the mutation of the huntingtin gene has severe consequences, we still know relatively little about the function and tasks of the healthy protein,” explains Kochanek. Proteins are the molecular machines of the cell. In order to fulfil their versatile tasks, they have a certain three-dimensional structure, similar to a specific component in a machine. “Now that we know the exact structure of huntingtin, we can further study which areas of huntingtin are particularly important and how other proteins cooperate with huntingtin functionally. In this way structures could be deduced to be targeted therapeutically by certain drugs.”

Right now, there is a lot going on in Huntington’s disease research. Great hope is directed to a method, which mutes the huntingtin gene with so-called Antisense-Oligonucleotides for the treatment of Huntington’s disease. These small molecules reduce the formation of huntingtin proteins in the cells, but the drug cannot differentiate between the normal and the pathologically altered huntingtin protein. Also for this reason, it is important to learn more about the function of the healthy huntingtin protein. Kochanek confidently looks into the future: “The decoded structure will bring us a big step ahead”.

“The antisense oligonucleotide treatment trials are presently only conducted at very few clinics. The Neurological University Clinic Ulm leads the drug testing for Germany. Some of the currently reviewed antisense oligonucleotides reduce both the formation of the normal and the mutant huntingtin protein, while others predominantly seek to lower the altered huntingtin. It is currently unclear whether a partial inhibition of the formation of normal huntingtin protein has disadvantages and is tolerated without undesirable side effects. This is yet another reason why it is important to learn more about the normal function of the huntingtin protein. To this end, the study will make an important contribution,” says Bernhard Landwehrmeyer, the Director of the Huntington Outpatient Clinic of the Neurology Department at the University Medical Center Ulm and heads the world’s largest international cohort study on Huntington’s disease.

Thanks for the elaboration, Mike.