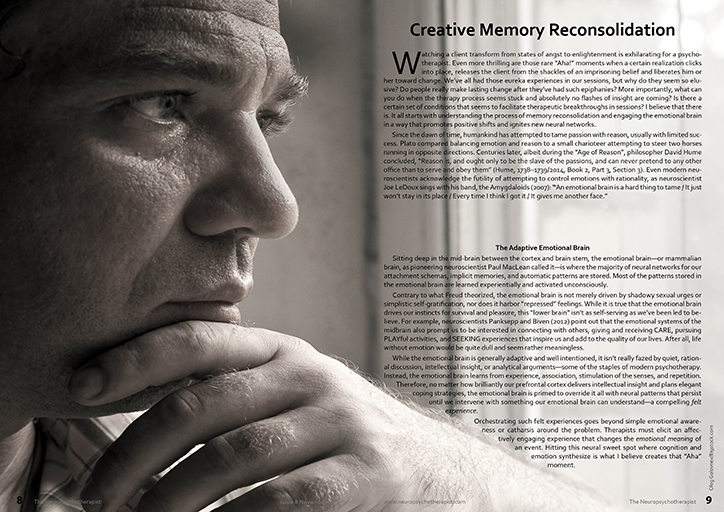 Watching a client transform from states of angst to enlightenment is exhilarating for a psychotherapist. Even more thrilling are those rare “Aha!” moments when a certain realisation clicks into place, releases the client from the shackles of an imprisoning belief and liberates him or her toward change. We’ve all had those eureka experiences in our sessions, but why do they seem so elusive? Do people really make lasting change after they’ve had such epiphanies? More importantly, what can you do when the therapy process seems stuck and absolutely no flashes of insight are coming? Is there a certain set of conditions that seems to facilitate therapeutic breakthroughs in sessions? I believe that there is. It all starts with understanding the process of memory reconsolidation and engaging the emotional brain in a way that promotes positive shifts and ignites new neural networks. Since the dawn of time, humankind has attempted to tame passion with reason, usually with limited success. Plato compared balancing emotion and reason to a small charioteer attempting to steer two horses running in opposite directions. Centuries later, albeit during the “Age of Reason”, philosopher David Hume concluded, “Reason is, and ought only to be the slave of the passions, and can never pretend to any other office than to serve and obey them” (Hume, 1738–1739/2014, Book 2, Part 3, Section 3). Even modern neuroscientists acknowledge the futility of attempting to control emotions with rationality, as neuroscientist Joe LeDoux sings with his band, the Amygdaloids (2007): “An emotional brain is a hard thing to tame / It just won’t stay in its place / Every time I think I got it / It gives me another face.”

Courtney Armstrong, MEd., is a licensed professional counselor and gives international trainings on a variety of topics for mental health professionals. She is the author of The Therapeutic Aha! to be published, by W. W. Norton in March 2015, as well as the book Transforming Traumatic Grief. Courtney contributes to the Psychotherapy Networker magazine, as well as other books and journals, and has made several radio and TV appearances. She offers several free resources for therapists on her website www.courtneyarmstronglpc.com.