The human brain consists of a highly complex network of approximately 85 billion nerve cells, which continually exchange information with each other. In order for this complex network to function efficiently, it is important that the distances between neurons encoding similar properties remain relatively short. In the human visual system and in that of many mammals, the neurons that respond to objects with similar orientation are indeed located near each other. Interestingly, such an ordered structure cannot be found in rodents. Researchers from the Frankfurt Institute for Advanced Studies, the Max-Planck-Institute for Brain Research and the Ernst-Strüngmann Institute for Neuroscience have studied why such differences between these animal species exist using two different computer models. Unexpectedly, the researchers found that the existence of this ordered structure is not only determined by the connectivity in the circuit, but also by the total number of neurons.

Distinct regions of our brain are responsible for different tasks, such as vision, language, and memory. Within these regions, the nerve cells – or neurons – that respond to similar features are also located near each other, forming so-called neural maps. These neurons are strongly interconnected, which enables them to communicate with each other. If similar cells are in close proximity to each other, the paths connecting them are shorter and our brain works more quickly and efficiently. A prominent example of such neural maps is the arrangement of nerve cells with similar orientation preferences. These nerve cells are located in the brain’s visual cortex, and they recognize the orientation of individual objects in our field of vision (vertical, horizontal, diagonal, etc.). The colored visualization of these orientation preferences results in pinwheel-like patterns on the surface of the brain. Interestingly enough, these “pinwheels” exist in many types of mammals, but not in rodents, which instead possess an unstructured neural map. 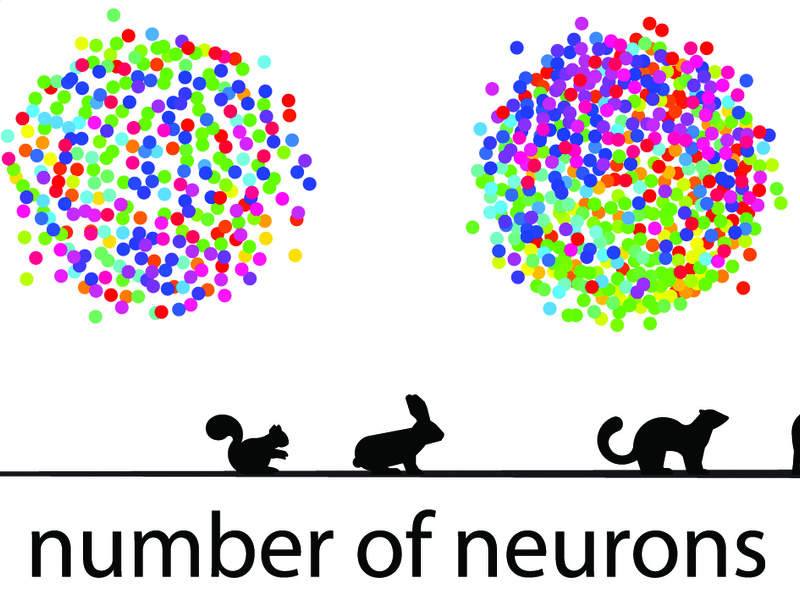 Neuroscientists have long speculated whether the rodents’ neural circuitry differs from that of other mammals. The Frankfurt research group, led by Hermann Cuntz, has now demonstrated with two radically different models that the structure of neural maps is determined by the number of nerve cells in addition to the underlying neural connectivity. This result is a simple explanation for the observed differences in the neural maps. Rodents, such as mice or rats have a significantly lower number of neurons due to their body size and their relatively lower density of nerve cells compared to other types of mammals.

Indeed, the models show that with an increasing number of neurons, the neural map transitions from unstructured to structured. In addition to a rapid transition from an unstructured to a structured neural map, there is also a gradual increase in the quality of the structure with an increasing number of neurons. Therefore, ferrets or tree shrews display less structure in the neural map of the visual cortex than closely-related species with more neurons in their visual system. “The apparent difference in the neural map of rodents’ visual systems could be caused by the lower number of nerve cells in the examined species – therefore, there is not necessarily any difference in the underlying neural circuitry,” the lead author Marvin Weigand explains. Therefore, the “pinwheels” could exist in the largest species of rodents, the capybaras native to South America.

In order to reveal the dependence of the neural maps’ structural quality on the interconnectivity – in other words, the number of relevant connections per neuron – the research group adopted two models from different scientific disciplines for its own purposes. The first model was based mainly on multidimensional scaling. In this numerical method, objects are sorted spatially according to their similarity – in this case, the similarity of the circuitry of the nerve cells. The second model was a modification of the so-called XY model. This model, which originally came from statistical physics, was also used by David J. Thouless and J. Michael Kosterlitz for examining topological phases of matter, for which they were awarded last year’s Nobel Prize in Physics. Incidentally, the predictions derived from the models apply to all possible neural maps and could possibly lead to a better understanding of the relationship between the number of neurons and the quantity of encoded attributes in the brain.