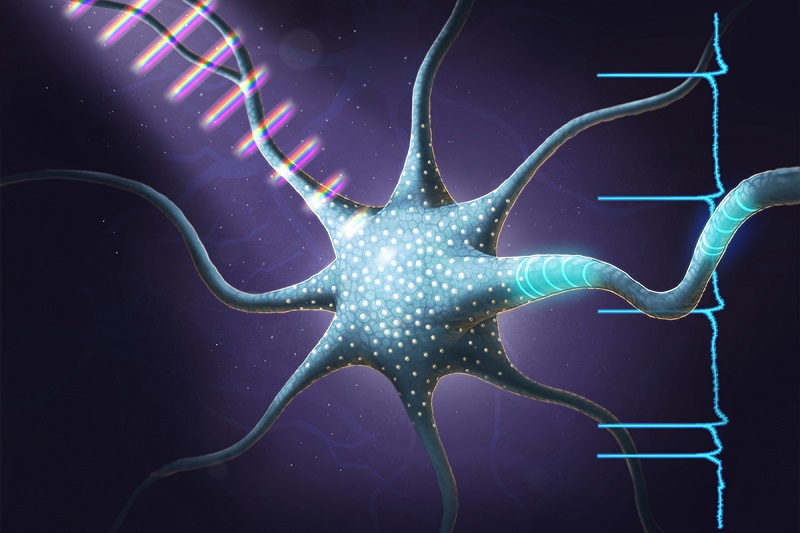 Specially tailored, ultrafast pulses of light can trigger neurons to fire and could one day help patients with light-sensitive circadian or mood problems, according to a new study in mice at the University of Illinois.

Chemists have used such carefully crafted light beams, called coherent control, to regulate chemical reactions, but this study is the first demonstration of using them to control function in a living cell. The study used optogenetic mouse neurons – that is, cells that had a gene added to make them respond to light. However, the researchers say the same technique could be used on cells that are naturally responsive to light, such as those in the retina.

“The saying, ‘The eye is the window to the soul’ has some merit, because our bodies respond to light. Photoreceptors in our retinas connect to different parts in the brain that control mood, metabolic rhythms and circadian rhythms,” said Dr. Stephen Boppart, the leader of the study published in the journal Nature Physics. Boppart is an Illinois professor of electrical and computer engineering and of bioengineering. Boppart also is a medical doctor and a professor in the Carle Illinois College of Medicine.

The researchers used light to excite a light-sensitive channel in the membrane of neurons. When the channels were excited, they allowed ions through, which caused the neurons to fire.

While most biological systems in nature are accustomed to the continuous light from the sun, Boppart’s team used a flurry of very short light pulses – less than 100 femtoseconds. This delivers a lot of energy in a short period of time, exciting the molecules to different energy states. Along with controlling the length of the light pulses, Boppart’s team controls the order of wavelengths in each light pulse.

“When you have an ultrashort or ultrafast pulse of light, there’s many colors in that pulse. We can control which colors come first and how bright each color will be,” Boppart said. “For example, blue wavelengths are much higher energy than red wavelengths. If we choose which color comes first, we can control what energy the molecule sees at what time, to drive the excitement higher or back down to the base line. If we create a pulse where the red comes before the blue, it’s very different than if the blue comes before the red.”

Boppart says coherent control could give optogenetics studies more flexibility, since changing properties of the light used can give researchers more avenues than having to engineer mice with new genes every time they want a different neuron behavior.

Outside of optogenetics, the researchers are working to test their coherent control technique with naturally light-responsive cells and processes – retinal cells and photosynthesis, for example.

“What we’re doing for the very first time is using light and coherent control to regulate biological function. This is fundamentally more universal than optogenetics – that’s just the first example we used,” Boppart said. “Ultimately, this could be a gene-free, drug-free way of regulating cell and tissue function. We think there could be ‘opto-ceuticals,’ methods of treating patients with light.”