Captured on film for the first time: microglia nibbling on brain synapses

For the first time, EMBL researchers have captured microglia nibbling on brain synapses. Their findings show that the special glial cells help synapses grow and rearrange, demonstrating the essential role of microglia in brain development.

Around one in ten cells in your brain are microglia. Cousins of macrophages, they act as the first and main contact in the central nervous system’s active immune defense. They also guide healthy brain development. Researchers have proposed that microglia pluck off and eat synapses – connections between brain cells – as an essential step in the pruning of connections during early circuit refinement. But, until now, no one had seen them do it.

That is why Laetitia Weinhard, from the Gross group at EMBL Rome, set out on a massive imaging study to actually see this process in action in the mouse brain, in collaboration with the Schwab team at EMBL Heidelberg. “Our findings suggest that microglia are nibbling synapses as a way to make them stronger, rather than weaker,” says Cornelius Gross, who led the work. 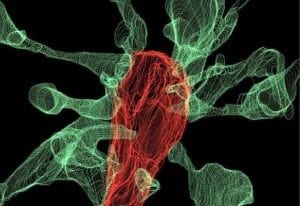 The team saw that around half of the time that microglia contact a synapse, the synapse head sends out thin projections or ‘filopodia’ to greet them. In one particularly dramatic case – as seen in the accompanying image – fifteen synapse heads extended filopodia toward a single microglia as it picked on a synapse. “As we were trying to see how microglia eliminate synapses, we realised that microglia actually induce their growth most of the time,” Laetitia Weinhard explains.

It turns out that microglia might underly the formation of double synapses, where the terminal end of a neuron releases neurotransmitters onto two neighboring partners instead of one. This process can support effective connectivity between neurons. Weinhard: “This shows that microglia are broadly involved in structural plasticity and might induce the rearrangement of synapses, a mechanism underlying learning and memory.”

Since this was the first attempt to visualise this process in the brain, the current paper entails five years of technological development. The team tried three different state-of-the-art imaging systems before they succeeded. Finally, by combining correlative light and electron microscopy (CLEM) and light sheet fluorescence microscopy – a technique developed at EMBL – they were able to make the first movie of microglia eating synapses.

“This is what neuroscientists fantasised about for years, but nobody had ever seen before,” says Cornelius Gross. “These findings allow us to propose a mechanism for the role of microglia in the remodeling and evolution of brain circuits during development.” In the future, he plans to investigate the role of microglia in brain development during adolescence and the possible link to the onset of schizophrenia and depression.