Can Probiotics be Used for the Treatment of Mental Health Problems?

Probiotics have certainly become quite the rage across the world for the treatment of all kinds of ailments from irritable bowel syndrome (IBS) to infectious diarrhoea to stress to low mood. Some might say that the enthusiasm has been rather slow to develop. Bonnie remembers reading an article in the 1970s describing the Russian medical practice of always prescribing probiotics for patients being prescribed antibiotics. And who has not read of the (over-simplified?) interpretation of longevity in the Caucasus (Azerbajian, Georgia) being due to their diet of yoghurt. Beginning in the 1970s, Dannon used that association to promote their products in North America.

Recently, the popular press has propagated the idea that probiotics are the next antidepressants, using headlines like “The Mental Health Benefits of Probiotics: ‘Good Bacteria’ May Improve Mood, Fight Depression”, “Are Probiotics the New Prozac?”, “Can Probiotics Improve Your Mood?” to “Could Bacteria Be the Answer to Treating Depression?” 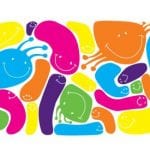 The idea that supplemented probiotic bacteria — “live  microorganisms that, when administered in adequate amounts, confer a health benefit on the host”3; p.58 — could be used as a treatment for depression was brought to our attention by Logan and Katzman.4 The term “psychobiotics” was coined by Dinan and colleagues5 to describe probiotic bacteria that produce health benefits in patients suffering from mental health problems. Indeed, there are many narrative reviews extoling the virtues of probiotics and the potential they hold for reducing inflammation and improving brain function. Animal models have demonstrated that administration of probiotics can affect emotional behaviour. A possible mechanism by which supplemented probiotics may change emotional states is through altering the microbial composition of the gut, limiting production of proinflammatory cytokines (proteins important in cell signalling), and reducing inflammation, which can have clear effects on gut–brain communication.6

The theory sounds great, but does the evidence support the theory?

Given the amount of press that has been given to the topic of probiotics as a potential therapy for depression but also more broadly for psychiatric symptoms, a former PhD student of Julia’s, Amy Romijn, reviewed the literature as part of her PhD program. She was interested in finding out how extensive the evidence base actually was for the use of probiotics for the treatment of symptoms.

She conducted a systematic review, which requires extensive searching through thousands of articles to find the types of trials that are viewed as good quality and have treatment implications. The only articles that were included were  double-blind, randomized, placebo-controlled human trials, that used a standardized, validated scale to assess the effects of probiotic interventions compared with placebo on psychological outcomes, or symptoms of psychiatric disorders.

Surprising to us, only ten trials met the inclusion criteria. More surprising was that it was quite hard to extract meaningful data from many of the trials as not all the statistics had been provided in the publications. Also, due to the huge variability in the quality of the trials, it was hard to extract any meaningful conclusion from the studies we did find. Overall, there were far more trials showing no benefit of probiotics over placebo than positive trials (ie probotics were found to be better than placebo) in all areas assessed (stress, depressed mood, schizophrenia, autism and anxiety).

However, due to the variability in population, method, sample size, duration of intervention period, bacterial strains used, and placebo product used, interpreting the results of these trials cohesively was seriously problematic. The variability in population was a considerable issue, as a majority of studies were conducted in populations which were irrelevant to the topic: e.g. adults with irritable bowel syndrome regardless of mental function (30% of the trials), and healthy adults/healthy smokers (30% of the trials). Only two trials were conducted in relevant populations (one trial in children with autism7 and one in adults with schizophrenia8) and neither showed a benefit of probiotics over placebo on psychological outcomes or psychiatric symptoms.

Amy’s systematic review, which was just published this week,9 concluded:

So what does this mean? Well – it’s like anything, the craze seems to come before the evidence. We need to be a little more cautious about believing that probiotics are going to help alleviate psychological symptoms. At this point in time we really don’t know and much more research is required to effectively provide advice to people considering this option for treatment. Having said that, people do get better on probiotics, they just don’t often get better than the placebo group. The question is whether that improvement can be entirely attributed to the placebo effect or not. The jury is still out on this one.

One very important feature of the probiotic research will have to be addressed in future publications: number and quantity of strains. Usually when we write about nutrients, or even medications, we might mention the importance of dose — meaning quantity. But in the probiotic world, there is another facet that requires attention: there are dozens of strains. Do they have different effects? Are some more important than others? And what about prebiotics?