Can Empathy Be Taught? – Robert Moss

“Can Empathy Be Taught?”

For anyone who has done clinical supervision of graduate students, there is no doubt that there are wide variations in the “natural” abilities of students to utilize warmth, genuineness, and empathy in therapy sessions. The ability of the therapist to convey to a client that there is an accurate perception of his/her emotional state entails both an accurate labeling and description by the therapist. However, those with the more “natural” abilities also display both non-verbal (e.g., facial expressions) and vocal (i.e., tone, inflections, and volume of voice) behaviors that reinforce what is said. So the answer to the big question from my perspective is that “what is said” is much easier to teach than is the “how it is said.” 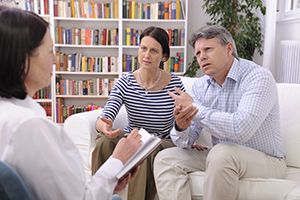 Textbooks and supervisors can provide suggestions on what words to use in situations that can provide the client with the verbal recognition of his/her emotional condition. In relation to the “neurobiology” of empathy, my theory is that it relates to the cortical hemispheres (Moss, 2006, 2007, 2010, 2013; Moss, Hunter, Shah, & Havens, 2012). The left hemisphere for most individuals is dominant for spoken language. Thus, the therapist can learn the verbal components and, in turn, voice this to a client’s left hemisphere relatively easily. Over time a therapist learns more statements and practices these across clients.

If accurate information is given to the client, the verbalized descriptions (processed by the client’s left hemisphere’s “verbal interpreter”) provide an explanation for the non-verbal emotional processing of the client’s right cortex. I (Moss, 2013) have suggested this reduces the conflict (allowing “interhemispheric congruence”) between the two sides with the result being that the client perceives more self-acceptance, internal peace, and may experience an emotional release (e.g., becoming tearful). The self-acceptance involves the left hemisphere’s verbal interpreter recognizing the right hemisphere’s emotion is reasonable (i.e., developing a new schema). The internal peace is a function of decreased inhibitory activity between the right and left frontal lobes. The emotional release is a function of decreased left frontal inhibition on the right frontal lobe which controls the behavioral expression of affective responses.
When the client has a change in affect, this in turn is processed by the therapist’s right hemisphere. It is the right hemisphere processing that allows a therapist to learn experientially to sense when desired affective response is occurring with a client. In turn, the therapist’s right frontal lobe is primarily responsible for the non-verbal and vocal behaviors in terms of “how” therapeutic information is given. In an article I wrote on negative emotional memories, I noted that in relation to learning non-verbal therapy skills:

Clinical experience would be the only means of forming these expressive experiential memories. This leads to the logical conclusion that many experienced, practicing clinicians have more extensive therapy-related experiential right hemisphere receptive and expressive memories than do many academic clinicians. Manualized ESTs cannot teach therapists these right cortical memories since these can only develop as a result of experience with “real world” clients. However, it is possible to use manuals to make therapists verbally aware (i.e., left cortex) of important in-session behaviors that can influence treatment outcome. Additionally, modeled behaviors can be rehearsed by novice therapists with videotaped feedback. Making therapists verbally aware and utilizing experiential training techniques could increase the speed with which these important skills are learned. (Moss, 2007, pp. 218-219)

Few neuroscience professionals will contest the fact that all people learn a “native” verbal language based on the language to which they are exposed during childhood. This appears to occur bilaterally to some degree initially. Yet, the capacity of the left hemisphere to handle the detailed memories tied to spoken language likely leads it to assume final primary control. Similarly, the quick and efficient processing in the right hemisphere allows it to effectively handle the non-detailed analysis and expression of non-verbal emotional components in relationships. Just as we develop a native verbal language of the left hemisphere, we develop a “native emotional language” of the right hemisphere. For those “natural” empathic individuals, the native emotional language they learned as a child involved those non-verbal skills.

The critical period for learning two languages and being truly bilingual is around the age of 8. It is possible to learn a second language later, but it will not ever be perfected. If what I have described is accurate, we learn our native emotional language and this will be with us for the rest of our lives. For those who developed empathic non-verbal skills early, these will remain and only get stronger. Perhaps these individuals have the ability to become “super” therapists, but not even be aware of exactly how they are accomplishing such therapeutic effects. For those who are not “naturals,” they can still get quite efficient in non-verbal therapy skills with sufficient training and experience. However, they will be comparable to someone who developed the use of a second verbal language after the critical period.

I hope this may stimulate some thought for the readers. My articles listed below are available on my contribution page at researchgate.net and academia.edu, as well as at my website www.emotionalrestructuring.com under current papers.

Brilliant article Robert, thanks for writing and sharing, I particularly like the idea of the “what” vs the “how” of empathy and the neuroscience perspective on this. The parallel with language learning is very compelling, and it seems it’s not impossible to learn to become fluent in empathy as an adult (just as adults can become fluent in other languages, though never quite the same as a native speaker) – but it is way harder than if this is learned in the critical period.

I’ve had discussions with colleagues and in supervision about what makes a “natural” therapist and this seems to go some way towards providing some kind of answer to that.

Very interesting, thank you, I will be checking out more of your work!

Rob, thank you for your positive feedback. Bob