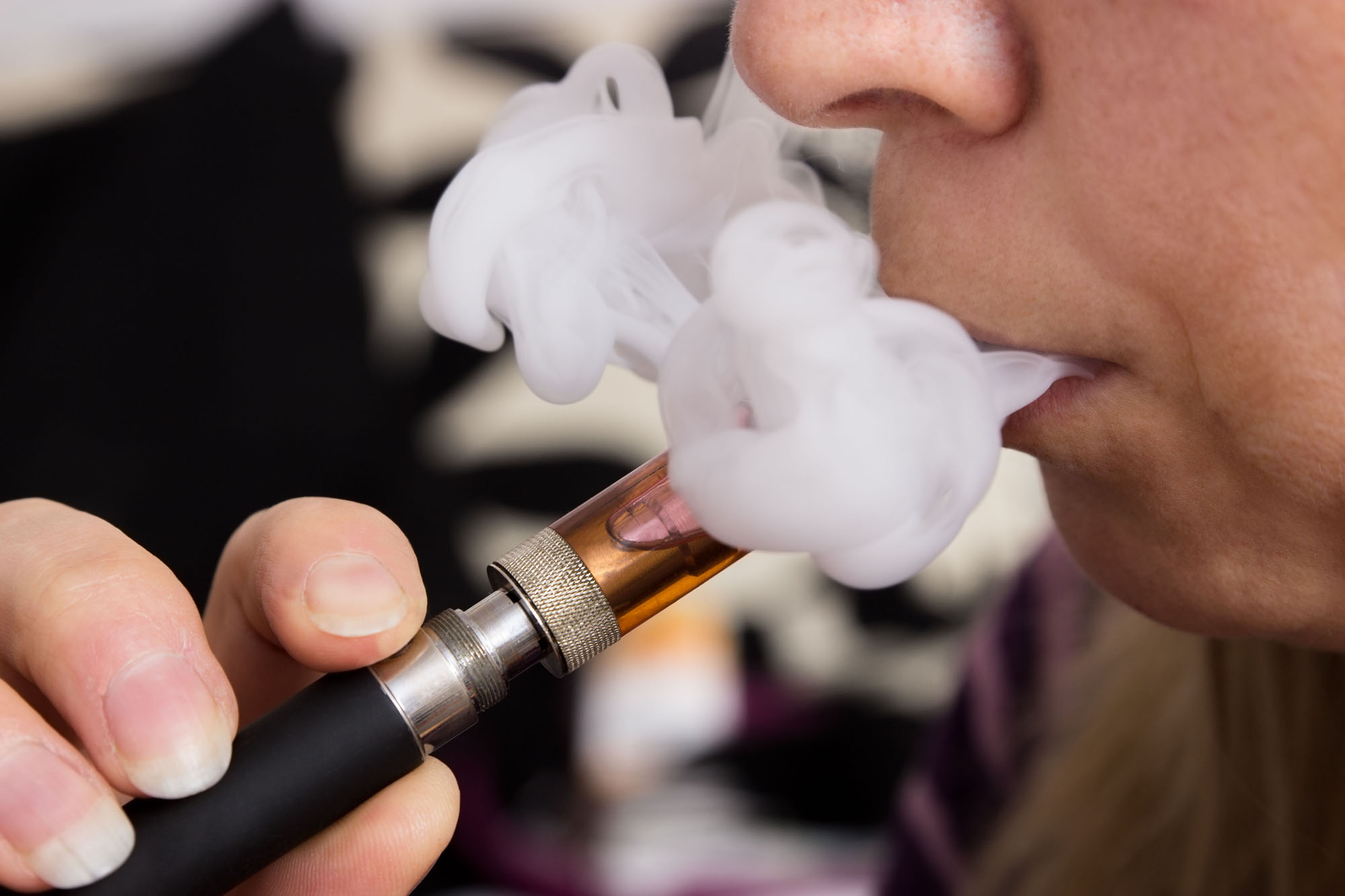 As e-cigarettes become more popular, fewer people are taking up smoking traditional cigarettes. But can e-cigarettes, an electronic nicotine delivery system, help people quit smoking altogether? That was the focus of a recent study led by a Hollings Cancer Center researcher.

The study found that smokers who are willing to use e-cigarettes tend to smoke less and have increased quit attempts, said Matthew Carpenter, Ph.D., a tobacco control and addiction expert at the cancer center at the Medical University of South Carolina (MUSC).

“Combustible cigarettes are the most harmful form of nicotine delivery. Alternative delivery of nicotine, through e-cigarettes, could significantly reduce harm and the risks of cancer and other diseases to smokers,” he said.

In the pilot study, funded by the National Institutes of Health, Carpenter evaluated e-cigarettes in terms of usage, product preference, changes in smoking behaviors and nicotine exposure. Sixty-eight smokers were evaluated: 46 were randomized to use e-cigarettes however they wished, and 22 were randomized to a control group.
Those in the e-cigarette group were given a device with either high or low doses of nicotine. Everyone was followed over a period of four months. The study was published in Cancer Epidemiology, Biomarkers & Prevention in November and is one of the few randomized studies in the U.S. to examine the effects of e-cigarettes and quit attempts.

“It is important to protect non-smokers, particularly adolescents and young adults, from starting any nicotine-containing product. This is something we need to really guard against.”

Results showed that when smokers were given e-cigarettes without any accompanying instructions or requirements for use, uptake was strong, and many participants went on to purchase their own e-cigarettes. This suggests that e-cigarettes might give smokers a suitable alternative to combustible cigarettes. Those who used e-cigarettes smoked less and were more likely to quit smoking, as compared to those in the control group.
“The results are consistent with trials done outside the U.S.,” Carpenter said. “Many people rated the e-cigarettes similar to their usual product, which further suggests that these products might promote switching. Anything that gets smokers off combustible cigarettes is a good thing.”

Of the two e-cigarette models used in the study, the more powerful device, with a higher dose of nicotine, showed stronger outcomes. People using e-cigarettes throughout the study smoked an average of 37 percent fewer cigarettes, showing a positive effect when making the switch and potentially serving as a tool to help smokers quit.

That’s good news for Carpenter and his colleagues at the Hollings Cancer Center. Smoking is the leading cause of cancer and has a negative impact on the effectiveness of cancer treatments. People who quit smoking, regardless of their ages, have substantial gains in life expectancy compared with those who continue to smoke.

Carpenter cautions that while e-cigarettes may help people smoke less or even quit, they are not for everyone. “It is important to protect non-smokers, particularly adolescents and young adults, from starting any nicotine-containing product. This is something we need to really guard against.” 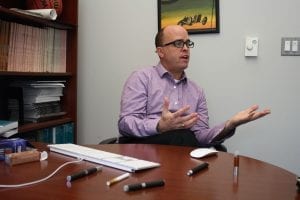 Tobacco control and addiction expert, Matthew Carpenter, Ph.D., will conduct an even larger study, funded by the National Cancer Institute, to further evaluate the effects of e-cigarettes on smokers. Photo by Dawn Brazell

“We’ve gotten very good at the public health messaging of conventional smoking and prevention efforts for adolescents, but now kids see a new technology-based product that is supposedly safer, flavored and isn’t a cigarette. These are all these things that raise our alarm bells for adolescents, and, in fact, e-cigarettes are more popular than conventional cigarettes among youth.”
E-cigarettes were only recently regulated by the Food and Drug Administration. Largely manufactured overseas, the quality control process varies, he says. Without enough information to answer the long-term public health issues of e-cigarettes, researchers like Carpenter are aware of the importance of further studies on the latest tobacco trends. Combustible cigarettes have been around for many decades. E-cigarettes have not, and the science has a lot of questions left to answer, he said.

As research continues, Carpenter and experts at the Hollings Cancer Center are eager to start an even larger study, which was funded by the National Cancer Institute, to further evaluate these outcomes. The study, Clinical Outcomes for a Nationwide, Naturalistic E-Cigarette Trial, or CONNECT, will begin recruiting more than 650 smokers across the U.S., including the Charleston metropolitan area in spring 2018.

How can someone get into that trial. I’d like to refer a smoker to aid his smoking cessation.