Can Artificial Intelligence Ever Truly Love You? 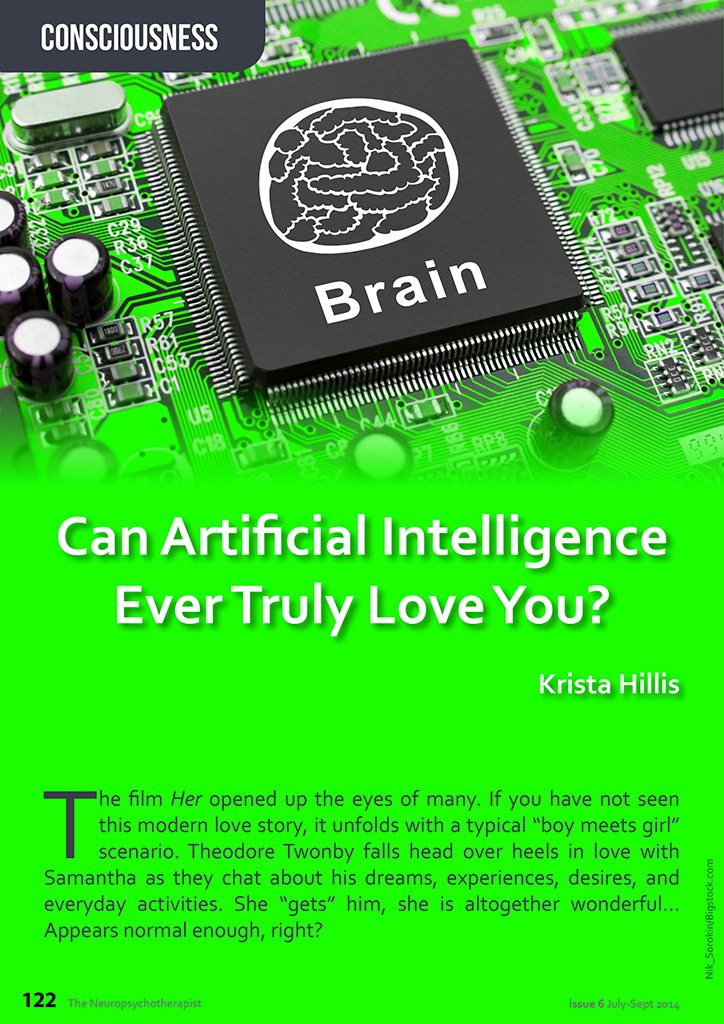 The film Her opened up the eyes of many. If you have not seen this modern love story, it unfolds with a typical “boy meets girl” scenario. Theodore Twonby falls head over heels in love with Samantha as they chat about his dreams, experiences, desires, and everyday activities. She “gets” him, she is altogether wonderful...

Samantha builds a strong bond with Theodore and he falls in love. There is, however, one small problem—Samantha is a computer operating system and Theodore is all human, feeling every possible emotion and feeling towards “her”.

Before smartphones existed, this Samantha-like being would have seemed impossible. We have now invented better hardware, allowing machine-learning techniques to evolve. Software algorithms now allow computers to perform tasks that we would perform within our day-to-day lives.

Algorithms have opened up a whole new world in terms of machine-learning. Machine-vision algorithms can identify faces and objects based on the parts that comprise a picture. They can also understand human speech due to speech-recognition algorithms; and meaningful speech is produced through speech synthesisers.

There is no doubt that many advancements have been made. Machine performance has greatly improved, making some pundits predict true artificial intelligence in the near future. However, most industry and academic leaders agree that AI and human intelligence sharing the same abilities, remains a distant reality.

The big question lies in an AI program being conscious, is this possible? Samantha talked like a real woman, but this does not mean that she had conscious thought. She was simply simulating all the feelings associated with conscious thought such as; passion, betrayal, and desire.

As we know, consciousness stems from the central nervous system. The brain is a crucial component of our conscious thoughts and feelings. Without a brain, how can you achieve consciousness?

Based on this view, if every relevant neural mechanism of consciousness was replicated, then you would be able to construct consciousness. Biological cause-and-effect would need to be present in order to produce function from mechanisms.

In terms of Scarlett Johansson (the voice behind Samantha), would we be able to recreate her brain? Would we be able to create an AI that could feel as we do? If a technique were invented that could scan her brain, her 100 billion neurons and quadrillion synapses would be included in this information. Based on this information future neuroengineers would hypothetically create a massive software package. This ‘SimSamantha,’ would require a supercomputer to simulate the biochemical processes found within Scarlett’s brain.

According to this view, the brain’s bioelectric activity would be captured and replicated. If this simulation captured all areas of consciousness, then SimSamantha could potentially feel love. This is known as ‘functionalism.’ Functionalists believe that the conscious mind is nothing more than pulsing brain circuits. These circuits create perception and thought processes.

Giulio Tononi is a psychiatrist and and neuroscientist. Tononi says that our conscious experiences come from ‘integrated information.’ Our sensory, motor, and cognitive processes are combined, which creates a specific experience.

If you were to watch the movie Her for instance, you would view the movie in colour. You could not make the picture appear black and white. That is because each experience is holistic, and highly integrated. The colour of the movie is an integrated component in terms of your overall experience. The information you are conscious of comes to you in a complete, whole fashion. These components that make up an experience can not be subdivided. This unity of consciousness is a cause-and-effect system of interactions throughout the brain.

Phi meters can calculate integrated information when your brain is in a particular state. A number is computed, displaying how irreducible the brain is. This means, it’s measuring how much the brain resists being broken into parts. The larger the number, the more sophisticated the conscious experience is. This value will be high if an organism has many neurons, with ample synaptic connections. If the system can be broken down into independent, non-interacting parts; the value will be zero. This system would experience nothing.

A great example of this can be seen within split-brain patients. These individuals have had their entire corpus callosum surgically cut in order to prevent epileptic seizures. The corpus callosum connects the left cerebral hemisphere to the right cerebral hemisphere. Once this is cut, there are two independent hemispheres. The brain was once whole, but now has a phi value equal to zero. The content that was once shared amongst the two hemispheres, has been split. Now, these two hemispheres have a level of consciousness present within each half.

If you wanted to create the experience of Samantha, you would need to replicate all of the interactions present in a real brain. This would entail a copy of an actual brain; a hypothetical artificial brain. This system would be made up of wires, transistors, and devices that would create identical cause-and-effect interactions amongst all components. This replication of a real brain would be referred to as ‘BrainSamantha’ vs. SimSamantha. This artificial brain would replicate the physical interactions between neurons, producing the same experience as the original human brain.

SimSamantha software would not work the same as the hypothetical BrainSamantha. SimSamantha software would have the ability to hear and speak as BrainSamantha does, but would not have any feelings. This computer system would send charges from one transistor to a handful of others;  which is not the same as sending electrical signals to thousands of neurons.

A digital simulation is not that same as a true replicated version. Within the movie Her, Theodore could not differentiate ‘SimSamantha’ from a hypothetical ‘BrainSamantha’. SimSamantha was never capable of truly loving him; simulation does not experience consciousness. It could never have loved him because it lacked true human feelings and experiences.