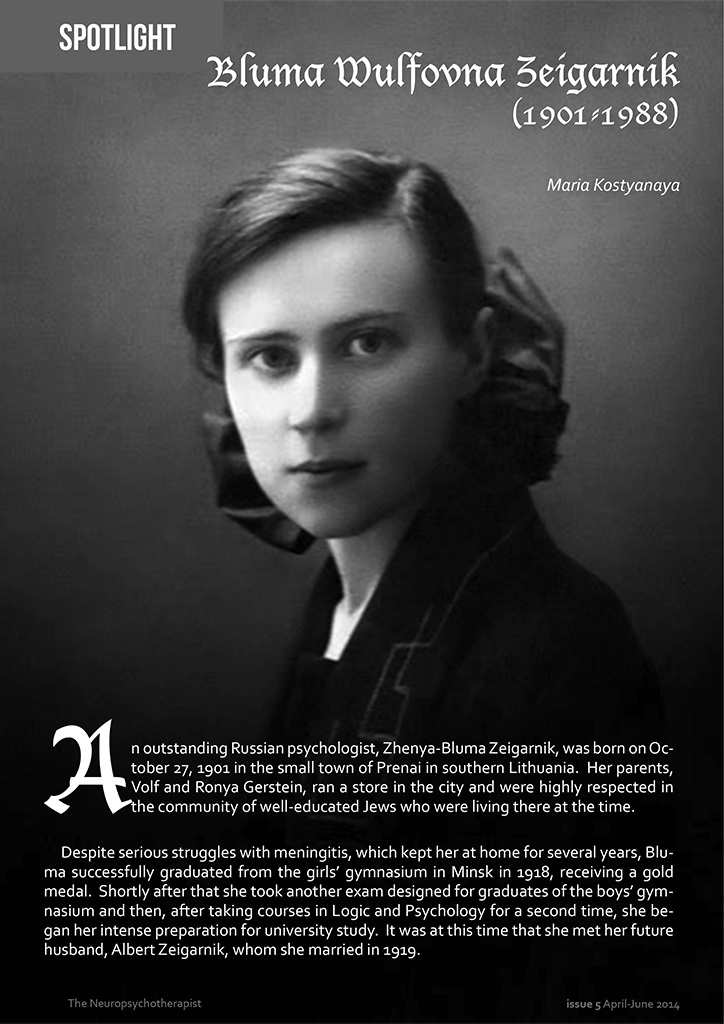 An outstanding Russian psychologist, Zhenya-Bluma Zeigarnik, was born on October 27, 1901 in the small town of Prenai in southern Lithuania.  Her parents, Volf and Ronya Gerstein, ran a store in the city and were highly respected in the community of well-educated Jews who were living there at the time.

Despite serious struggles with meningitis, which kept her at home for several years, Bluma successfully graduated from the girls’ gymnasium in Minsk in 1918, receiving a gold medal.  Shortly after that she took another exam designed for graduates of the boys’ gymnasium and then, after taking courses in Logic and Psychology for a second time, she began her intense preparation for university study.  It was at this time that she met her future husband, Albert Zeigarnik, whom she married in 1919.

In 1922, supported by her parents, Bluma enrolled in the Department of Philosophy at the University of Berlin, while her husband became a student at the Polytechnic Institute.

Inspired by her former literature teacher from the gymnasium, Bluma continued to develop her interest in psychology by attending lectures of the now-famous Gestalt psychologists—Wolfgang Kőhler, Max Wertheimer, and Kurt Lewin—as well as the lectures of Franz Ernst Spranger on pedagogy.

Bluma started working closely with Kurt Lewin, whose experimental studies were intended to substantiate the field theoretical approach (Lewin, 1939).  This was the time of her first scientific success when, in 1927, under the supervision of Lewin, her paper Das Behalten erledigter und unerledigter Handlungen (“Remembering Completed and Uncompleted Tasks”) was published in the journal Psychologische Forschung (Psychological Research), founded by Max Wertheimer.  In this diploma paper she described the world-famous phenomenon, the “Zeigarnik effect”, which states that adults tend to remember interrupted tasks approximately 90% better than completed ones, while children generally remember interrupted tasks.  It was only in 2001 that this work was finally published in the Russian language by the publishing company Smysl as a part of the collected works of Kurt Lewin.

In 1925 Bluma graduated from the university and received a doctoral degree following the publication of her study on interrupted tasks.  She continued to work at the University of Berlin as a part-time research scientist until 1931.

Soon enough the Zeiganiks lived out their dream of returning to Russia, where Bluma started working at the Institute of Higher Nervous Activity in Moscow.  At this time she met such remarkable Russian psychologists as Lev Vygotsky and Alexander Luria, whom she managed to introduce to Lewin soon afterwards.

Ever since her first visit to Kurt Goldstein’s clinic at Lazarett Hospital in Berlin, Zeigarnik had been preoccupied with clinical psychology, and in the 1930s this area became her primary interest.  However, even with the academic degree of Candidate of Biological Sciences granted to her in 1935, she was not able to publish a single scientific paper for the period between 1936 and 1939.  This was a hard time of ideological obstruction towards scientists in Russia when, in 1936, the resolution “On Pedological Perversions in the System of the People’s Commissariat of Education” was put out by the Central Committee of the VKP(b).

In 1938 Zeigarnik began to work as a psychologist–neurologist at the Institute of Psychiatry of the Ministry of Health in the Russian Soviet Federal Socialist Republic.  Then, in 1940, two major events happened in her life.  First, she was able for the last time to visit her mother in Lithuania after the signing of the Treaty of Non-aggression between Germany and the Union of Soviet Socialist Republics (USSR); and, second, in the summer her husband was arrested on a charge of having spied for Germany.  He was sentenced to ten years’ imprisonment with no right of correspondence, and

Bluma was left alone with their two children.  During this hard period of her life, Bluma Zeigarnik received much support from her closest friends Alexander Luria and Susanna Rubinshtein.

During the Second World War Zeigarnik was sent to the regional branch of the All-Union Institute of Experimental Medicine in Kisegach, in the Urals, where she began to work as a senior research scientist on restoring the psychological and somatic activity of people with brain injuries.  The data Zeigarnik gathered when she was working there was supposed to be summarized in her dissertation, but upon its completion all the materials were stolen.

In 1943 Zeigarnik went back to Moscow and continued her work as laboratory head at the Institute of Psychiatry.  In 1949 she also started to give courses at Moscow State University on a new interdisciplinary sphere of knowledge she greatly contributed to—pathopsychology.

The main methodological approach of the emerging field of pathopsychology that Zeigarnik saw in general psychology was the focus on finding the “single psychological link … in the norm and break-up or decay [which] helps understand in what way certain specific terms of disease may distort general regularities of mental life and change its structure” (Nikolaeva, 2011, p. 179).  She insisted on the importance of theoretical knowledge for the development of any discipline and, therefore, strongly supported the core ideas of the Vygotsky-Luria-Leontiev school of psychology.

Thus, following the concept of intra-vitam development and the formation of higher mental functions, Zeigarnik formulated major conditions for pathological phenomena of the mind (Bratus, 1988).  These phenomena might occur either due to a change in biological conditions caused by the pathology of the brain or otherwise because of a specific “narrow” framework of the patient’s life, limited by the disorder.  Zeigarnik believed that for an analysis of mental functions to be successful it is essential to qualify and classify clinical phenomena within a system of psychological concepts.  Hence, in her work, the whole clinical phenomenology of aphronia was psychologically qualified in the form of original and consistent classification and according to the place of the phenomenon in the structure of intellectual activity.

Another outstanding idea of Zeigarnik’s that she developed at this time was the qualification of the whole personality in the clinical picture of disorders.  She stated that, together with cerebral mechanisms of mental disorders, it was important to address a special—psychological—type of such mechanisms.  In other words, the distortion of personal activity by a patient can contribute significantly to pathological mental phenomena.

Following this idea, her disciples (e.g., Bratus, 1974; Leontiev, 1975; Kareva, 1975; Kornilova, 1980; Safuanov, 1998) showed that mental pathology might be psychologically manifested in: (a) the formation of pathological needs and motives; (b) the change of structure and hierarchy of motives; (c) in the break-up of meaning making, goal-setting, and goal achievement; (d) personal criticism; and (e) self-regulation.

Other core areas of research initiated by Zeigarnik included: inquiry into the role of the patient’s activity in symptom formation; the analysis of symbolic mediation as the most important mechanism of symptom formation; syndrome analysis, and pathopsychological experimentation as an original diagnostic procedure.

However, following many years of severe political ostracism in the USSR, Zeigarnik and her family were left almost destitute.  They were supported by Luria, Rubinshtein and Melekhov for nearly a decade, after which time Zeigarnik resumed her independent work both at the Institute of Psychiatry and Lomonosov Moscow State University.

In 1958, upon completion of her third doctoral dissertation, Zeigarnik was granted the degree of Doctor of Pedagogical Sciences; in 1965, she was conferred the title of Professor of Psychology; and in 1967 she was elected chair of the Faculty of Psychophysiology and Neuropsychology of Moscow State University.  It was the time of her worldwide recognition as a remarkable Soviet psychologist whose research went beyond her work on interrupted actions, and when most of her major works were finally published, namely, Thought Disorder in the Mentally Ill (Zeigarnik, 1959), Pathology of Thinking (Zeigarnik, 1962), Introduction to Pathopsychology (Zeigarnik, 1969), Personality and Pathology of Activity (Zeigarnik, 1971), and Foundations of Psychopathology (Zeigarnik, 1973).

In 1969 Zeigarnik managed to attend the International Congress of Psychology in London, and in 1978 she was awarded the First Degree Lomonosov Prize for a collection of works on the psychological manifestations of various mental disorders and the correction and rehabilitation of mentally disturbed patients.  Later, on her trip to Leipzig to attend the International Congress of Psychology, Zeigarnik  was awarded the Lewin Memorial Award, although she was not able to accept it herself because of political bans between East and West still in place at that time.

Suffering for many years from anemia that required frequent blood transfusions, Bluma nevertheless remained completely dedicated to her work right up until her death on February 24, 1988.  Despite all the vicissitudes of life, Bluma Zeigarnik was known to always express true joy from what she was doing as well as gratitude towards all the kind people who had helped her survive and become an outstanding scientist.