Bipolar or Borderline (or PTSD or ADHD)?

Bipolar or Borderline (or PTSD or ADHD)?
Managing Difficult Distinctions and Comorbidities 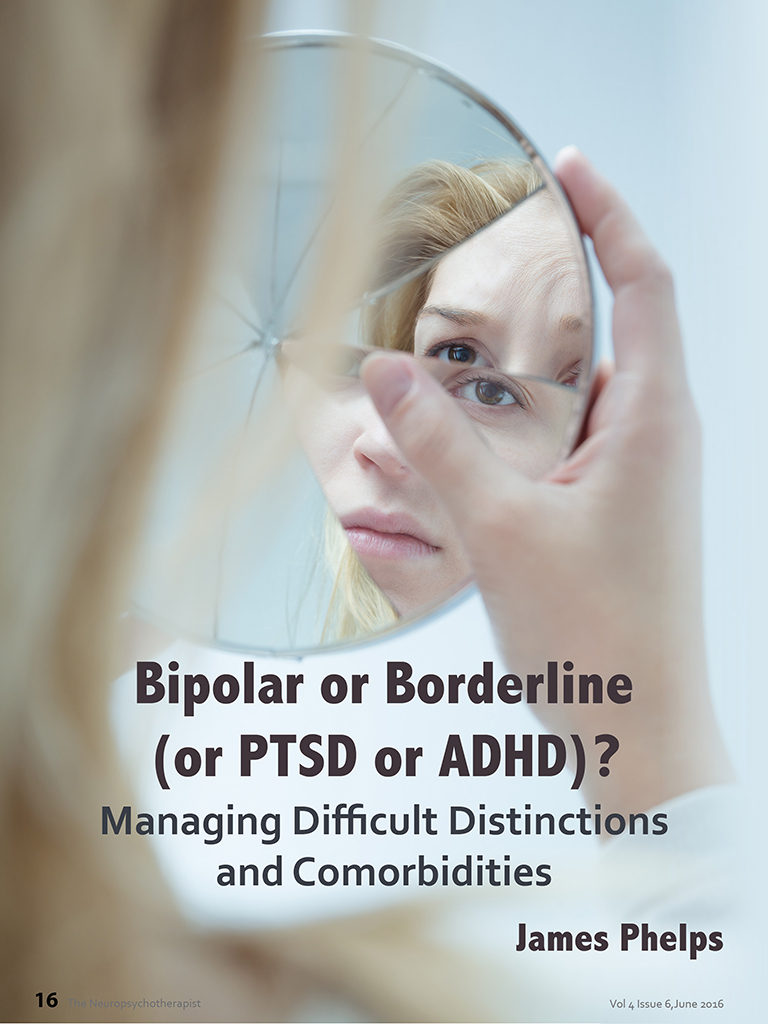 Bipolar disorders are in the differential for nearly every psychiatric presentation, from psychosis to depression to obsessive thinking to substance use. Three conditions present the most difficult differential diagnostic challenges relative to bipolar disorders because of the extensive overlap in diagnostic criteria and overall phenomenology: borderline personality disorder, post-traumatic stress disorder (PTSD), and attention deficit disorder (ADD). Worse, these conditions are commonly comorbid with bipolar disorders. Thus the diagnostic question is often not “this, or that?” but “this, that, or both?”
The bottom lines of this article are:

Borderline personality disorder (BPD)—what an unfortunate choice of terms. We in psychiatry who are so normal (ahem) shall deem a patient to have a “personality disorder.” Great public relations.
Nevertheless, there is a real phenomenon this label is intended to describe. Contrary to Akiskal and others, who suggested incorporating borderlinity into the bipolar spectrum (Akiskal et al., 2006), most recent data suggest that borderlinity is a different phenomenon than “bipolarity” (Ghaemi et al., 2014). The classic presentations of BPD (e.g., behaviors reflecting attachment problems, from overvaluation/devaluation to abandonment distress) are clearly different from the classic forms of Bipolar I (e.g., sustained euphoric mood, with pressured speech after two nights with no need for sleep). But as clinicians well know, there are many variations of borderlinity, often hesitatingly referred to in a diagnostic assessment as “borderline traits.”
Many authors have written about differentiating BPD and bipolar disorders. For example, Joel Paris and Donald Black (2015) emphasize getting the right treatment to the right patient, particularly psychotherapy for BPD instead of medications. Even though I disagree with their emphasis on DSM criteria to differentiate BPD from bipolar disorders, I completely agree with their emphasis on psychotherapy and avoidance of atypical antipsychotics.
In any case, controversy reigns in this area. Should you need an example, see the recent exchange between the BRIDGE team (Perugi et al., 2013) and Joel Paris (2013). Therefore, lest it be misunderstood: in the following analysis, I am not saying that some phenomenon which the “borderline” term attempts to capture does not exist. I am not saying it is a version of bipolar disorder. As the very controversy here attests, there is overlap and uncertainty about the boundaries of these two conditions. So while some research teams continue to work on distinguishing them (e.g., Coulston et al., 2012), we need some means of coping with the middle ground, where borderline traits overlap with bipolar traits...

I agree, the attachment problems and abandonment issues seem more prominent in BPD. Also the fragility, neediness and “wish to be adopted” seem much more evident in BPD than Bipolar. Mahler emphasized the difficulties in the symbiotic stage of development with BPD which does not seem to apply to all Bipolar patients.

I cannot download the PDF for this or other articles despite being logged in and get an error message (failed to download PDF).
Please provide assistance.

Hi Anja, I tried accessing the article using your credentials and was able to download the article. Once you log in you can type “Bipolar or Boarderline PTSD” on the search bar and once you access the article there should be a “Member’s Download Link” below the featured image. Just right-click the download link and select “Save Link As” to download a copy of the PDF. Let me know if this worked for you.

Hi Vlad thank you, I have tried this but am unable to open the pdf files even after I have saved them in this way. This applies to numerous articles that do not have the green download or read online button. I could also not open the videos. Does this mean it is a PC setting? Thank you.