Beer can lift your spirits 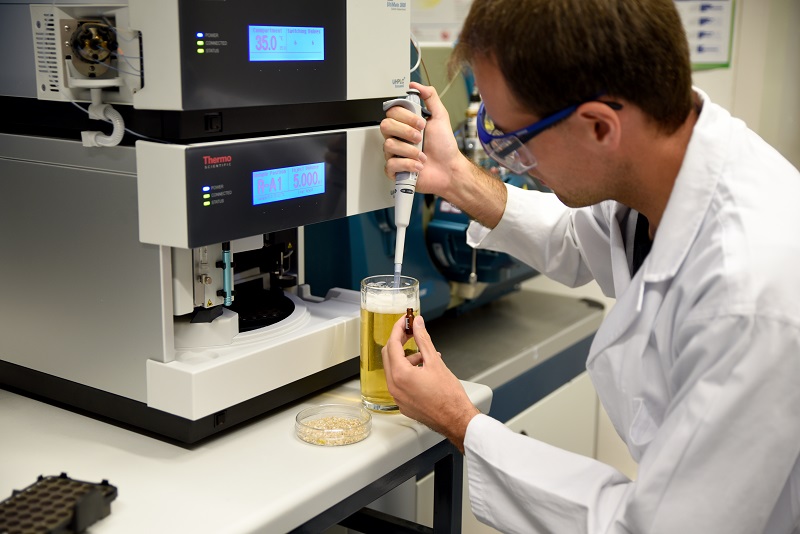 FAU-based researcher Thomas Sommer preparing a sample of beer. After processing, the level of hordenine in the sample is determined using high-performance liquid chromatography and mass spectrometry. Image: FAU/Katharina Götz)

Visitors to the Oktoberfest have always known it and now it has been scientifically proven – beer can lift your spirits. Scientists at Friedrich-Alexander-Universität Erlangen-Nürnberg (FAU) examined 13,000 food components to find out whether they stimulate the reward centre in the brain and make people feel good. Hordenine which is found in malted barley and beer seems to do the job quite well.

Some foods make us happy. Well, maybe not happy but they make us feel good. That is why we cannot stop eating when we have had enough. Scientists call this hedonic hunger – the drive to eat for pleasure rather than to satisfy an actual biological need. This feel-good effect is caused by the neurotransmitter dopamine – tempting foods stimulate the reward centre in the brain where the dopamine D2 receptor is located. Researchers of the Chair of Food Chemistry at FAU investigated whether there are special substances in foods that activate the dopamine D2 receptor in the same way as dopamine.

The team worked with FAU’s Computer Chemistry Centre using a virtual screening approach which is often used in pharmaceutical research. This process analyses food components in a computer simulation rather than in the laboratory. Using computer simulations means that all types of known substance can be investigated. In the laboratory, it is only feasible to test a small selection of foodstuff extracts using standard screening techniques.

Initially, the scientists set up a database of 13,000 molecules which are present in foodstuffs. Using this database, the objective was to find those molecules that fit the dopamine D2 receptor – rather like finding the right key for a lock. The system was then used to identify which molecules could interact with the dopamine D2 receptor; these might be present in synthetic substances already known to interact with the receptor, such as medicines for treating Parkinson’s and schizophrenia, or which might be candidates for interaction due to the three-dimensional structure of the receptor. In the end, 17 of the original 13,000 options were selected and these were analysed in the laboratory in cooperation with the Division of Medicinal Chemistry at FAU.

The most promising results were obtained for hordenine, a substance present in malted barley and beer. ‘It came as a bit of surprise that a substance in beer activates the dopamine D2 receptor, especially as we were not specifically looking at stimulant foodstuffs,’ explains Prof. Dr. Monika Pischetsrieder.

Just like dopamine, hordenine stimulates the dopamine D2 receptor, however it uses a different signalling pathway. In contrast with dopamine, hordenine activates the receptor solely through G proteins, potentially leading to a more prolonged effect on the reward centre of the brain. The team is now investigating whether hordenine levels in beer are sufficient to have a significant effect on the reward centre. All things considered, the results indicate that hordenine may well contribute to the mood-boosting effect of beer.