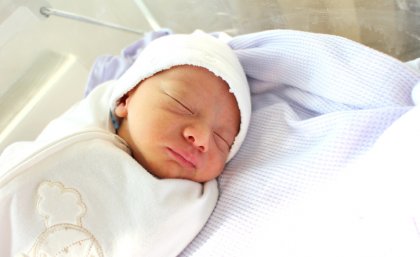 The brain waves of healthy newborns – which appear more abnormal than those of severe stroke victims – could be used to accurately predict which babies will have neurodevelopmental disorders.

University of Queensland researchers are investigating whether an electroencephalogram (EEG) could identify apparently healthy infants who will later be found to have neurodevelopmental deficits.

Dr Simon Finnigan from the UQ Centre for Clinical Research and the Royal Brisbane Clinical Unit said the measure would be statistically compared with clinical assessments of the infants at two years of age.

“Clinical symptoms of neurodevelopmental disorders – affecting movement, vision or other functions – often do not become evident until the toddler years or later,” Dr Finnigan said.

“If our measure is found to accurately predict outcomes, it could allow for early interventions and therapies to begin at the earliest possible opportunity, when they can be most effective.

“Our preliminary results in data from the first 60 babies look very promising.”

Dr Finnigan’s collaboration with UQ Professor of Perinatal Medicine Paul Colditzwas informed by his research on stroke patients, including studies with scientists in Barcelona.

“Our detailed analyses involve converting the EEG signals into objective measures of brain function, like blood pressure or a Richter scale.

“When we applied this analysis in the babies, we were surprised they had so much slow brain activity – typically about one wave per second compared to eight to 10 in adults,” Dr Finnigan said.

These slow wave patterns accounted for an average 85 per cent of the brain activity in newborns.

“In adults, anything over 50 per cent would be considered abnormal, and at 85 per cent we would expect them to die within hours due to severe stroke.”

Dr Finnigan said slow brain waves were first reported in the 1950s but it had never been understood why they occurred in healthy newborns.

He proposes it is due to incomplete brain connections.

The next step for Dr Finnigan’s team is to analyse EEG measures from more than 150 babies, and thoroughly compare them with neurodevelopment outcomes.

“Our research will be the first time these measures from newborns have been compared to clinical measures in any detail,” he said.

“Through investigating this in a large cohort we will determine the accuracy of predicting which infants will later be found to have a neurodevelopmental deficit.

“We may find that an EEG measure alone does not provide the greatest accuracy, and it may be improved by adding one or more other measures, from a clinical assessment or Magnetic Resonance Imaging.”