Are learning and unlearning bedfellows?

The human brain’s capacity for learning is astonishing: it can even memorize meaningless sounds if repeated. Hence, a pattern of white noise, like that produced by a radio when it can’t pick up any station, can be learned if heard only a few times. The listener doesn’t even have to be paying attention.

The researchers chose this kind of passive auditory stimulation—particularly well suited for subjects who are asleep—to explore the connection between learning and sleep. They exposed sleeping volunteers to noise that incorporated repeated sounds and then tracked their brain activity using electroencephalography. Since the brain reacts differently to new, unfamiliar sounds as opposed to learned sounds, electroencephalographic analysis can show researchers whether a sound heard has been memorized, even when the subject is not awake. 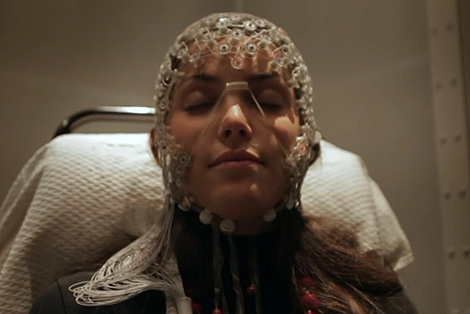 © Scientifilms – Déchiffrer la conscience, voyage dans l’étoffe de nos pensées. Participant of a sleep experiment equipped with an electroencephalogram. The electroencephalogram records brain’s electrical activity and allows to determine in real time whether a person is awake or asleep. Response handles placed in participants’ hands allowed them to categorise the sounds presented during the experiment.

Analysis of brain activity in subjects while asleep, and of their behavioral responses after waking, demonstrated they recognized the noises heard during both REM sleep and stage N2 sleep. These findings reveal that our brains are able to learn while in these two sleep phases. And indeed, during both phases—even though they are very different in terms of brain activity— it has been shown that the brain can process complex information, whether endogenous or exogenous1. However, while previous research on humans and other animals has shown that certain types of learning, like conditioning, can occur during sleep2, this study reveals that we can also memorize new representations and objects (here auditory ‘objects’) while dozing.

This study also yielded new information about deep sleep (stage N3). The researchers discovered just the opposite to hold true during this sleep stage: sounds previously learned during N2 sleep are forgotten, or unlearned, as if erased from memory. Furthermore, after waking, subjects find these sounds even harder to learn than completely new ones.

These findings support the idea that N2 and REM sleep favor cerebral plasticity and active memory consolidation, while N3 sleep seems to fulfill the necessary function of unloading memories that would otherwise accumulate day after day. These novel results are important because they could reconcile two theories on sleep’s function in memory that are often deemed contradictory: one sees sleep as a time for consolidating knowledge acquired during the day; the other imagines it to be a sieve for discarding information no longer needed. Having made their discovery, the researchers are now wondering what precise neural mechanisms underlie this double role sleep plays in memory.