From students stressing over exams to workers facing possible layoffs, worrying about the future is a normal and universal experience. But when people’s anticipation of bad things to come starts interfering with daily life, ordinary worry can turn into an anxiety disorder. About one in four adults will struggle with anxiety at some point in their lives, making it one of the most common mental disorders in the United States.

Now, new research from Washington University School of Medicine in St. Louis sheds light on what might be happening in an anxious brain. A new study has identified a group of neurons that become active when an animal is faced with the possibility – but not the certainty – of an unpleasant event.

The study is published July 26 in Nature Communications.

“We found a population of neurons that activated specifically when monkeys thought something bad or annoying – like a puff of air to the face – might be coming, but not when they knew for certain it was,” said Ilya Monosov, PhD, an assistant professor of neuroscience and of biomedical engineering and the study’s author. “These neurons did not activate when the animals thought they might get something good, like a sip of sweet juice. Only an uncertain bad experience activated these cells.”

The research provides opportunities for understanding the roots of anxiety and may eventually lead to new treatments for the disorder.

Monosov studied a part of the brain known as the anterior cingulate cortex, an area on the outer layer of the brain that lies deep inside the groove where the brain’s two hemispheres fold in to meet each other.

Differences in the anterior cingulate cortex have been found that distinguish healthy people and people with mental disorders such as anxiety, obsessive-compulsive disorder, attention deficit and depression, suggesting that the area plays a role in mental illness. However, the cells involved in these brain differences and their consequences are not well understood.

To study how the brain responds to uncertainty, Monosov turned to rhesus monkeys, which have anterior cingulate cortices similar to those of people. He trained two monkeys to recognize three geometric designs, one indicating they were about to get an annoying puff of air to the face, one that meant they had a 50-50 chance of getting an air puff, and one indicating nothing would happen. 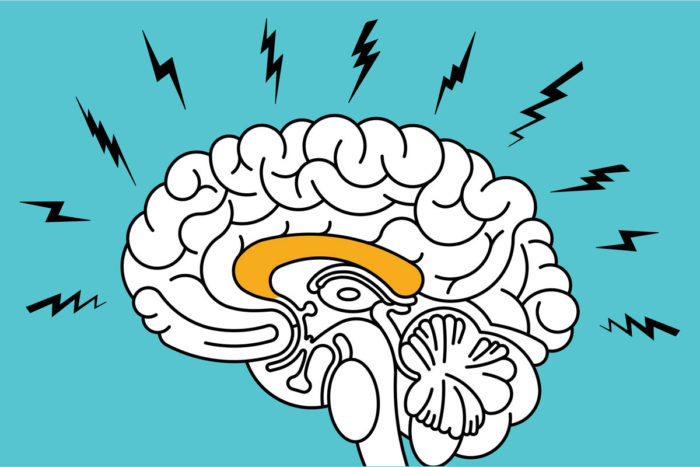 Then, Monosov recorded the activity of individual neurons in the anterior cingulate while monkeys were shown these geometric images. When the animal knew the odds were even (50-50) that a puff of air was coming its way, a group of neurons started firing rapidly. These cells were not active when an air puff was guaranteed to happen, only when it might happen, which means the cells were not responding to the unpleasantness of the experience, but to the uncertainty of it.

Monosov also trained the monkeys to recognize geometric designs indicating the certainty or possibility of getting something good: a sip of juice. He identified an entirely different group of cells that changed their activity in response to the possibility or certainty of getting the treat. As with the air puff experiment, the neurons that responded when the animals knew they had the chance of a sip were different than the ones that responded when the juice was guaranteed.

These findings shed light on the cellular underpinnings of complex mental processes. How the brain responds to the possibility that something bad – or good – might happen is rooted in our neurons.

“Now that we know which cells are active when an animal is faced with the uncertainty of a bad experience, we can try to disrupt the activity of these cells,” Monosov said. “It opens up avenues of research, which may one day lead to new ways to treat disorders such as anxiety and depression.”