The new article provides a more integrating and global view on the genetic basis of the aggressive behaviour in humans.

Researchers have identified 40 new genes they believe are related to aggressive behavior in both humans and mice. The findings deepen understanding of the genetic basis of aggressiveness.

An international study published in the journal Molecular Psychiatry has identified forty genes related to aggressive behaviour in humans and mice. Participants in the study, which could contribute to shape future pharmacological targets, are the researchers Bru Cormand and Noèlia Fernàndez Castillo, from the Faculty of Biology and the Institute of Biomedicine of the UB (IBUB), the Research Institute Sant Joan de Déu (IRSJD) and the Rare Diseases Networking Biomedical Research Centre (CIBERER). Both are experts in the field of genomic data analysis and genic interaction network.

The origins of the violent behaviour are multifactorial and respond to the interaction of several factors ─biological, cultural, social, etc.─ which can modify the expression of the human behaviour. The new study, led by the expert Stephen V. Faraone, from the State University of New York (United States), provides a deeper and integrative view on the genetic basis of aggressiveness and the common functional ways that alter the brain circuit of violent behaviour in different species.

On mice and humans: genes, evolution and aggressiveness 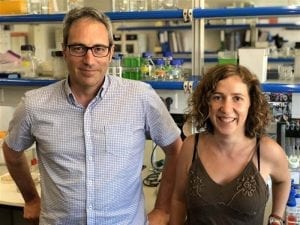 The experts Bru Cormand i Noèlia Fernàndez Castillo, from the Faculty of Biology and the Institute of Biomedicine of the UB (IBUB).

According to the lecturer Bru Cormand, head of the Research Group on Neurogenetics at the Faculty of Biology of the UB, “aggressive behaviour is a present feature over the biological evolution since it has some benefits for the survival of species (accessing resources, breeding, etc.). In these lines, our study focuses on the biological basis of aggressiveness, i.e. those endogenous factors that tend to show certain antisocial behaviours”.

“However –says Cormand- aggressiveness has a significant environmental element, which was not considered in this scientific study. Therefore, it would be interesting to combine genetic and environmental data from the same individuals to consider the interactions that can occur between the same risk factors that influence this kind of behaviour”.

Humans and mice share a common genetic base regarding violent behaviour, authors note. In particular, they identified forty genes in humans and mice that can lead to a risk of aggressive behaviours “and that take part in biological processes that are related to the development and function of the central nervous system, communication within cells and cellular function maintenance”, adds researcher Fernàndez Castillo (IBUB-CIBERER-IRSJD). “Some gens are likely to function as important nodes of the genic networks prone to a violent behaviour, and those would be probably related to other genes which play a minor role”, adds the researcher.

“If any of those central genes is altered, it could affect the other genes and lead to the aggressive phenotype. For instance, RBFOX1 gene, identified in the new study and cited in a previous article by our team (European Neuropsychopharmacology, 2017), regulates the expression of fifteen out of the forty genes that we identified in the study. Another gene we marked –MAOA, which codes a metabolizing enzyme of the serotonin neurotransmission-, is related to drugs used to treat several psychiatric pathologies, sycg as selective inhibitors of serotonin reuptake or SSRIs”.

Aggressiveness: from ADHD to major depression

The study reveals a shared genetic base between the aggressiveness in children and adults and the Attention Deficit Hyperactivity Disorder (ADHD), and the aggressiveness in adults and major depression. However, there is no genetic correlation with other psychiatric disorders –schizophrenia, bipolar disorder, autism or post-traumatic stress disorder-, so everything suggests these pathologies would not share risk genetic factors with aggressiveness.

The experimental protocol of the new study combines several analysis evaluating the genetic basis of aggressiveness from different perspectives. 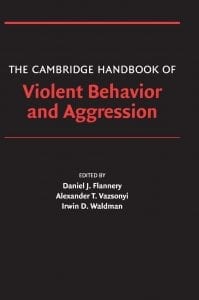 The Cambridge Handbook of Violent Behavior and Aggression

Regarding humans, they analysed several association studies –between patients and healthy volunteers- at a genomic scale (GWAS), to identify risk genetic variants that are common among the general population, as well as transcriptome data showing alterations in the genic expression related to certain aggressive phenotypes.  In murine models, researchers studied genes expressed differentially in aggressive animals and non-aggressive animals from the same strain, and other genes that, once they are inactive –in transgenic mice-, form an aggressive phenotype, sometimes related to a broader symptomatology.

Working globally on the involved functional pathways in violent behaviours enabled researchers knowing more about the details of the molecular mechanisms that work behind aggressiveness. “The most relevant verification of the study is that many genes are related to aggressiveness according to the results of very different experimental methodologies, which strengthens the idea of those participating in the behaviour profile”, highlight Cormand and Fernàndez Castillo, members of the international multidiscipline consortium Aggressotype for the study of biological and environmental causes of aggressiveness.

The UB experts have published several articles shaping candidate genes –in humans, in murine models, zebra fish and in insects- as prone factors to alterations in behaviour.

Violence: government, communities, and individuals can change the situation worldwide

“The 20st century will be remembered as the century of violence. Many people live with it daily and regard it as something consubstantial to the human condition, but it is not so. We can avoid it. Governments, communities and individuals can change the situation”, said Nelson Mandela, politician and Nobel Peace Prize awardee in 1993, in the world report on violence and health of the World Health Organization (WHO, 2002). In 2014, the WHO report on the world situation regarding prevention of violence quoted Nelson Mandela’s words and called all countries to improve preventive measures against violent behaviours. In this world scenario, facing a problem that affects all the layers of society, scientific research will become more and more important in the knowledge of the basis of antisocial behaviours and the improvement of the prevention of episodes of violence and aggressiveness in the 21st century society.