Remembrance of things past — bacterial memory of gut inflammation

The microbiome, or the collections of microorganisms present in the body, is known to affect human health and disease and researchers are thinking about new ways to use them as next-generation diagnostics and therapeutics. Today bacteria from the normal microbiome are already being used in their modified or attenuated form in probiotics and cancer therapy. Scientists exploit the microorganisms’ natural ability to sense and respond to environmental- and disease-related stimuli and the ease of engineering new functions into them. This is particularly beneficial in chronic inflammatory diseases like inflammatory bowel disease (IBD) that remain difficult to monitor non-invasively. However, there are several challenges associated with developing living diagnostics and therapeutics including generating robust sensors that do not crash and are capable of long-term monitoring of biomolecules.

In order to use bacteria of the microbiome as biomarker sensors, their genome needs to be modified with synthetic genetic circuits, or a set of genes that work together to achieve a sensory or response function. Some of these genetic alterations may weaken or break normal signaling circuits and be toxic to these bacteria. Even in cases where the probiotic microbes tolerate the changes, the engineered cells can have growth delays and be outcompeted by other components of the microbiome. As a result, probiotic bacteria and engineered therapeutic microbes are rapidly cleared from the body, which makes them inadequate for long period monitoring and modulation of the organism’s tissue environment.

A team at the Wyss Institute of Biologically Inspired Engineering led by Pamela Silver, Ph.D., designed a powerful bacterial sensor with a stable gene circuit in a colonizing bacterial strain that can record gut inflammation for six months in mice. This study offers a solution to previous challenges associated with living diagnostics and may bring them closer to use in human patients. The findings are reported in Nature Biotechnology.

Silver, who is a Core Faculty member at the Wyss Institute and also the Elliot T. and Onie H. Adams Professor of Biochemistry and Systems Biology at Harvard Medical School, thought of the gut as a first application for this system due to its inaccessibility by non-invasive means and its susceptibility to inflammation in patients suffering from chronic diseases like IBD. “We think about the gut as a black box where it is hard to see, but we can use bacteria to illuminate these dark places. There is great interest from patients and doctors that push us to build sensors for biomarkers of gut conditions like IBD and colon cancer,” said Silver, “We believe that our work opens up enormous possibilities that can exploit the flexibility and modularity of our diagnostic tool and expand the use of engineered organisms to a wide variety of applications.” 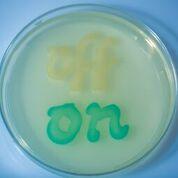 Key to the team’s work is the introduction of a memory module to the circuit that is able to detect a molecule of interest and respond to this exposure long after the stimulus is gone. As bacteria can be rapidly cleared from the intestinal tract, the team used a strain of bacteria that is part of the microbiome of mice, and engineered it to contain the sensory and memory elements capable of detecting tetrathionate. Tetrathionate is a transient metabolic molecule produced in the inflamed mouse intestine as a result of either infection with pathogenic bacteria like Salmonella typhimurium and Yersinia enterocolitica or genetic defects affecting inflammation.

The synthetic genetic circuit designed by the Wyss team contains a “trigger element” that is adopted from the natural system specifically recognizing the biomarker (in this case tetrathionate) in cells, or that can be developed using synthetic approaches when no prior sensor exists. The second element in the circuit is the “memory element” that resembles a toggle switch and has been adapted from a virus that attacks bacteria. It consists of two genes (A and B for simplicity) that regulate each other depending on whether the stimulus is present. In the tetrathionate sensor, the product of gene A blocks expression of gene B when tetrathionate is absent. When tetrathionate is produced during inflammation and is sensed by the trigger element, levels of A decrease and the gene B is induced and begins to shut off expression of gene A. The expression of the B gene is also coupled to a reporter gene which turns bacteria from colorless to blue only when they have switched the memory element on. The switch can be maintained in the on state long after the first tetrathionate exposure.

After verifying the functionality of the sensor in a liquid culture of bacteria, David Riglar, Ph.D., the study’s first author, was able to show that it detected tetrathionate in a mouse model of gut inflammation caused by infection with S. typhimurium up to six months after administration of the sensor-containing probiotic bacteria. Through simple analysis of fecal matter, the synthetic circuit’s memory state was confirmed to be on and its DNA unchanged and stable. “Our approach is to use the bacteria’s sensing ability to monitor the environment in unhealthy tissue or organs. By adding gene circuits that retain memory, we envision giving humans probiotics that record disease progression by a simple and non-invasive fecal test,” said Riglar.

Silver’s team plans to extend this work to sensing inflammation in the human gut and also to develop new sensors detecting signs of a variety of other conditions.

“Pam’s work demonstrates the power of synthetic biology for advancing medicine as it provides a way to rationally and rapidly design sophisticated sensors for virtually any molecule. If successful in humans, their technology would offer a much less expensive and more specific way to monitor gut function at home than sophisticated imaging instruments used today”, said Donald Ingber, M.D., Ph.D., Founding Director of the Wyss Institute, the Judah Folkman Professor of Vascular Biology at Harvard Medical School and the Vascular Biology Program at Boston Children’s Hospital, as well as Professor of Bioengineering at the Harvard John A. Paulson School of Engineering and Applied Sciences.