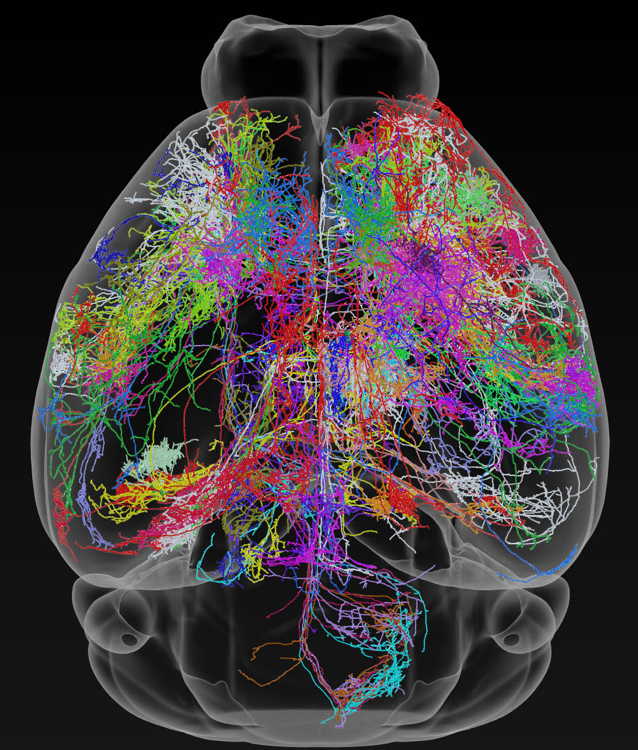 Scientists can see and explore these wandering neural traces in 3-D, in the most extensive map of mouse brain wiring yet attempted. The map – the result of an ongoing effort by an eclectic team of researchers at the Janelia Research Campus – reconstructs the entire shape and position of more than 300 of the roughly 70 million neurons in the mouse brain. Previous efforts to trace the path of individual neurons had topped out in the dozens.

“Three hundred neurons is just the start,” says neuroscientist Jayaram Chandrashekar, who leads the Janelia project team, called MouseLight for its work illuminating the circuitry of the mouse brain. He and colleagues expect to trace hundreds more neurons in the coming months – and they’re sharing all the data with the neuroscience community.

The team released their current dataset and an analysis tool, called the MouseLight NeuronBrowser, on October 27, 2017, and will report the work in November at the annual Society for Neuroscience meeting in Washington, D.C. They hope that the findings will help scientists ask, and begin to answer, questions about how neurons are organized, and how information flows through the brain.

“MouseLight’s new dataset is the largest of its kind,” says neuroscientist Wyatt Korff, director of project teams at Janelia. “It’s going to change the textbook view of neurons.”

In a typical biology textbook, neurons look something like a fried egg with a tail. Neurons send messages racing down the tail, or axon, and other neurons pick up the messages via branching tendrils called dendrites. Information zipping between these cells is what allows people to pick up a coffee cup or remember where they put the car keys. Scientists have long known that the textbook view of neurons is oversimplified, Chandrashekar says. But the team’s data suggest that neurons are often vastly more far-reaching and connected than scientists once thought.

Researchers have built broad maps outlining which parts of the brain connect to which, but capturing a zoomed-in view of individual neurons is rife with technical hurdles. Scientists have to light up neurons inside a mouse brain, slice it into thin sheets, image the sheets with a microscope, and then pick out single neurons among the millions of images collected.

The Janelia team tackled the problem by fine-tuning each step of the process. “This work was only possible with a team science approach,” Korff says. Researchers involved in the project ranged from neuroscientists and anatomists to computer scientists and software engineers.

First, the researchers inject mouse brains with a virus that highlights only a few dozen neurons. Then the team “clears” the brain – to help light penetrate the tissue. Next, a high-tech light microscope hits the brain with pulses of light, takes an image of the highlighted neurons, and shaves off a 200-micrometer brain slice with a vibrating razor blade. The whole process repeats until the entire brain is imaged.